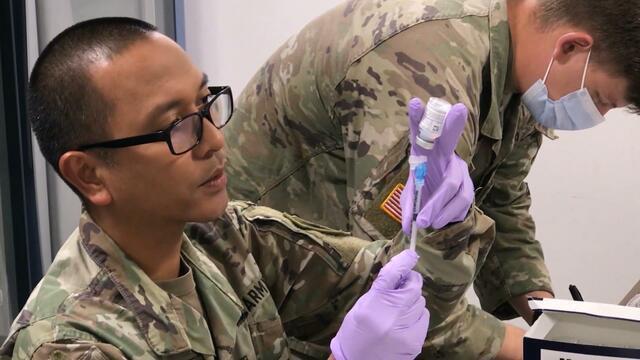 As his state grapples with what local health officials call a “severely worsening” COVID-19 outbreak, Texas Senator Ted Cruz, along with North Dakota Senator Kevin Cramer, introduced legislation on Monday to ban federal mask and vaccine mandates. But there appears to be little chance either bill will advance in the Democratic-controlled Senate.

The No Mask Mandates Act would end rules requiring masks on federal property and public transportation, and would apply to everyone regardless of vaccination status. It would overturn President Biden’s executive order mandating face masks at federal sites and the January 29 mandate by the Centers for Disease Control and Prevention that requires masks on public transit systems, airplanes and other transportation.

It would also prohibit any future federal mask mandates and would prohibit federal funding from being used to “develop, implement, or otherwise enforce” federal rules or regulations that require someone to wear a mask because of COVID-19, whether or not a person is vaccinated.

“Thanks to vaccinations and natural immunity of Americans who have recovered from COVID-19, America is reopening,” Cruz said in a statement. “…We as a country have taken extraordinary steps to defeat this disease, and I’m proud we’ve taken these steps.”

Cruz went on to cite the “enormous harms” caused to the economy and individuals.

Cruz, a Republican, represents Texas, which is seeing a devastating surge of COVID-19. In Austin, officials activated an emergency alert system on Monday to warn that the infection rate is “severely worsening.” An alert sent out to the public called the situation is “dire,” and said that while health care facilities are open, “resources are limited due to a surge in cases” — a problem that is being felt around the state.

Travis County, where Austin is located, has more than 3,400 active cases of COVID, according to the state’s health department. There are more than 160,000 cases statewide.

The No Vaccine Mandates Act would make it illegal to require anyone to get a vaccine that received emergency use authorization by the FDA — even if it later is granted full FDA approval. Health care officials would also be barred from vaccinating children and teenagers who are under 18 without parent or guardian permission. (Most states already require parental consent, but some allow exceptions.)

The Pentagon yesterday announced plans to require the vaccine for active-duty troops. Many hospitals require health care workers to be vaccinated, and a growing number of businesses are considering doing so as well.

Cruz said, “My view on vaccines is simple. I got the vaccine because it was the right choice for me. But I also believe in individual freedom. No one should force anyone to take the vaccine — including the federal government or an employer.”

“When it comes to handling COVID-19, Americans are self-governed people who have more than enough information available to them on how to talk to their doctor and figure out what is best for themselves and their families,” Cramer said in a statement, criticizing “[e]fforts by the Biden Administration and its allies to bully or force people to comply with mask and vaccine mandates.”

In Cramer’s home state of North Dakota, health professionals are concerned about a surge in COVID cases. Dr. Richard Vetter, the chief medical officer of Essentia Health system, told the Grand Forks Herald on Monday that the next two months “are going to be critical.” Essentia Health announced last week that it will require all of its staff members to be vaccinated against COVID-19 as a condition of their employment.

CDC data shows that the areas with some of the highest transmission rates of COVID-19 are also those with some of the lowest rates of vaccinations. On August 5, the agency reported more than 125,000 new confirmed cases — the most daily cases since the peak on January 8.

Most new infections are a result of the now-dominant Delta variant, which is nearly twice as contagious as previous strains, according to the CDC. Nearly all of the people who are hospitalized or dying from COVID-19 are unvaccinated.