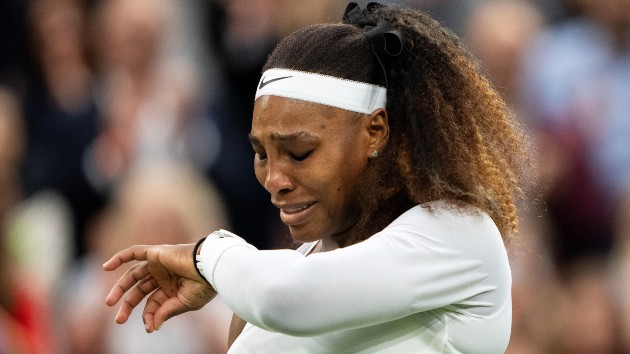 (NEW YORK) — Serena Williams was forced to withdraw from Wimbledon Tuesday after injuring her right hamstring during her first-round match against Aliaksandra Sasnovich.

Williams, 39, slipped on the grass during the first set of the match, causing her to take a medical timeout. She returned with a limp but later fell to her knees, crying out in pain. The match ended with both players tied 3-3 in the first set.

Williams walked off the court in tears. While she didn’t speak to reporters after the match, she addressed her fans on Instagram.

“I was heartbroken to have to withdraw today after injuring my right leg,” she wrote in her post. “My love and gratitude are with the fans and the team who make being on centre court so meaningful. Feeling the extraordinary warmth and support of the crowd today when I walked on – and off – the court meant the world to me.”

On Wednesday, her coach, Patrick Mouratoglou, told ESPN, “Apparently the injury is at the top of her hamstring, in the glute.”

It remains to be seen whether Williams will be able to continue her quest to win her 24th Grand Slam title later this summer when the US Open kicks off in August.