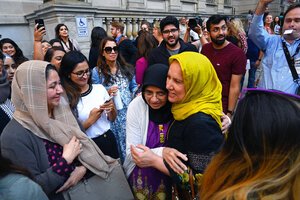 Adnan Syed's mother, Shamim Syed, center right, celebrates with friends outside of the courthouse after a Baltimore judge ordered the release of her son after overturning his conviction, Monday, Sept. 19, 2022, in Baltimore. (Kenneth K. Lam /The Baltimore Sun via AP)

BALTIMORE (AP) — The creator of a true-crime podcast that helped free a Maryland man imprisoned for two decades in a murder case said that she feels a mix of emotions over how long it took authorities to act on evidence that’s long been available.

In a new episode of the “Serial” podcast released Tuesday, a day after Adnan Syed walked out of court following the vacating of his murder conviction, host Sarah Koenig noted that most or all of the evidence cited in prosecutors’ motion to overturn the conviction was available since 1999.

“Yesterday, there was a lot of talk about fairness, but most of what the state put in that motion to vacate, all the actual evidence, was either known or knowable to cops and prosecutors back in 1999,” Koenig said in concluding the new episode. “So even on a day when the government publicly recognizes its own mistakes, it’s hard to feel cheered about a triumph of fairness. Because we’ve built a system that takes more than 20 years to self-correct. And that’s just this one case.”

She argued that the case against Syed, which was featured on the first season of “Serial” in 2014, involved “just about every chronic problem” in the system, including unreliable witness testimony and evidence that was never shared with Syed’s defense team.

On Monday, Circuit Court Judge Melissa Phinn in Baltimore ordered Syed’s release after overturning his conviction for the 1999 murder of high school student Hae Min Lee, Syed’s ex-girlfriend. Syed was 17 at the time of Lee’s slaying and has always maintained his innocence.

At the behest of prosecutors who had uncovered new evidence, Phinn ordered that Syed’s conviction be vacated as she approved the release of the now-41-year-old.

Phinn ruled that the state violated its legal obligation to share evidence that could have bolstered Syed’s defense. She ordered Syed to be placed on home detention with GPS location monitoring. The judge also said the state must decide whether to seek a new trial date or dismiss the case within 30 days.

The Baltimore prosecutor’s office filed a motion last week to vacate Syed’s conviction, a filing that Koenig described as a “firework” coming from the same office that asked a jury to convict Syed more than two decades ago.

“The prosecutors today are not saying Adnan is innocent. They stopped short of exonerating,” she said. “Instead they’re saying that ‘back in 1999, we didn’t investigate this case thoroughly enough. We relied on evidence we shouldn’t have and we broke the rules when we prosecuted. This wasn’t an honest conviction.”