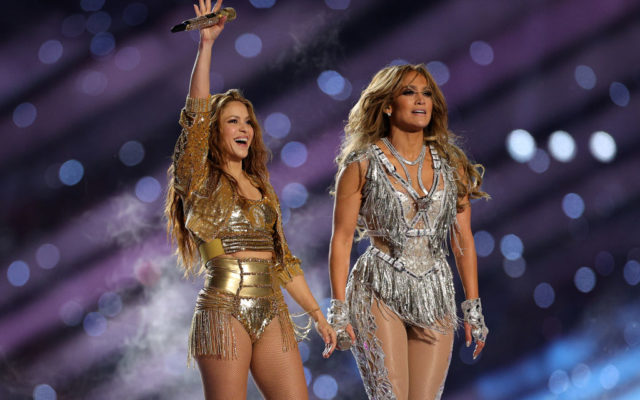 At a memorable point during the show, the 43-year-old Colombian artist looked straight at the camera and wiggled her tongue while making a sound. While this gesture left some fans puzzled, Shakira was actually nodding at her Lebanese heritage.

The “tongue-wag” is called a zaghrouta, or ululation in English. It is a long, wavering, high-pitched vocal sound accompanied by a rapid back and forth movement of the tongue. It’s used by women in Middle Eastern and North African cultures to express joy and strong emotions. Zaghrouta is often used during Arabic weddings to celebrate the union between two people, at parties and sometimes at funerals to honor a person’s life.

Though she was born and raised in Barranquilla, Colombia, Shakira’s paternal grandparents are from Lebanon, a country she has always kept close to her heart. As a matter of fact, the Grammy Award-winning singer’s last name is Mebarak, a common name in the Arab world. She often incorporates her heritage and culture in her art and music — through her belly dancing moves, for instance, or her use of  sounds in songs such as “Eyes Like Yours.”

Twitter users who were familiar with the meaning of zaghrouta immediately jumped in to explain its cultural meaning after some mocking memes started going viral.

“Debated whether to chime in, but so many disrespectful memes: Shakira wasn’t just being funny with the ‘tongue thing.’ what she did is called a zaghrouta, an Arabic tradition used to express joy, excitement, celebration. typically heard at weddings. FYI, she’s part Lebanese,” one Twitter user wrote.

“Siri, how do I explain a zaghroota to white people?” another said.

Some Twitter users noted that her performance included multiple references to Arab culture: “She had belly dancing, a mijwiz and a derbeke, performed ‘Ojos Asi’ which was one of the few Shakira songs to have Arabic in it.”

One thing’s for sure — Shakira’s Super Bowl halftime show performance introduced many viewers to new cultural influences and potentially brought a new word into our lexicon.