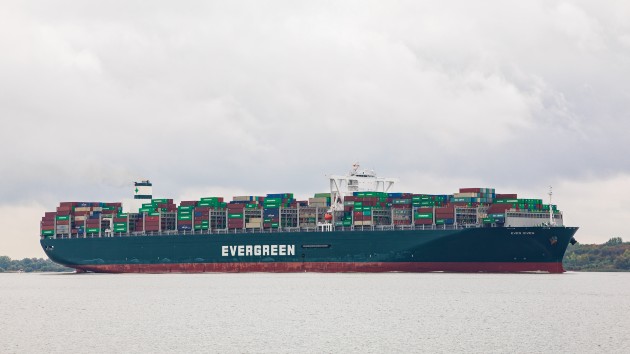 (NEW YORK) — A giant container ship that blocked traffic in Suez Canal for six days earlier this year was finally set free on Wednesday after its owners and insurers reached a settlement agreement with the vital waterway’s authority.

The agreement was signed in the coastal Egyptian city of Ismailia, with Ever Given — the skyscraper-sized vessel — sailing for the first time since it was dislodged on March 29, having brought global maritime trade to a standstill after being stranded near the southern end of the canal for nearly a week.

The terms of the deal, which came after more than three months of legal wrangling, were not disclosed by either side.

Egypt had initially demanded $916 million in compensation, which was deemed excessive by the vessel’s Japanese owner. The figure was later lowered to $550 million, with an Egyptian economic court ordering the seizure of the ship until a settlement was reached.

The Suez Canal Authority (SCA) estimated its losses at around $1 billion during the six days in which the waterway was blocked, pointing to lost transit fees and the costs of its salvage operation.

Local media footage showed Ever Given, which is 400 meters long and 59 meters wide (over 1,300 feet long and about 194 feet wide), transiting out of the Bitter Lake, where it has been held between two sections of the canal since it was re-floated.

The SCA and the vessel’s owners exchanged words of praise after the settlement agreement was struck.

“We are a regular and committed customer of the Suez Canal, and we would like to place on record our thanks to the Suez Canal Authority and others who worked tirelessly to release the ship as swiftly as possible when she ran aground over three months ago,” Shoei Kisen Kaisha Ltd, the owners of the ship, said in a statement.

The ship will first head to Port Said, Egypt, for a dive survey of the vessel, the company said, and after approval from the American Bureau of Shipping, the Ever Given “will then complete her voyage to the next port where her cargo will be discharged.”

Egypt’s massive salvage operation involved a flotilla of tugboats and dredgers that eventually managed to free the Panama-flagged ship, with stories of rescue crews working day and night to re-float it making local headlines and becoming a source of national pride.

“Today, I stand tall among the heroes of the Suez Canal … to announce to the world that an agreement has been reached regarding the ship crisis,” SCA head Osama Rabie said at a news conference.

Egypt announced in May plans to expand the southern part of the Suez Canal to include a parallel waterway so that ships can move in both directions at the same time.

In 2015, Egypt inaugurated a 35-km (nearly 22 miles) parallel waterway in the canal’s northern section in a project that cost the country $8 billion.