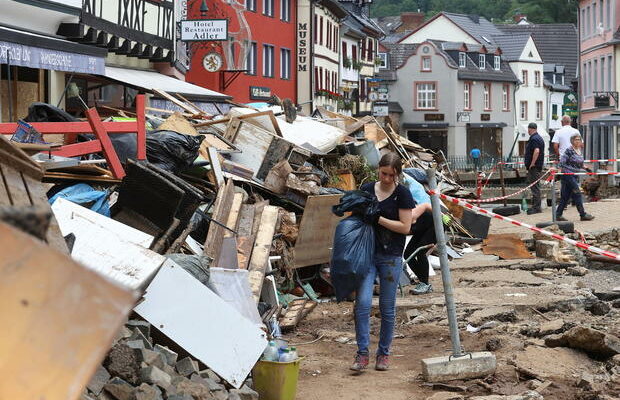 A woman carries a bag in an area affected by floods caused by heavy rainfalls in Bad Muenstereifel, Germany, July 19, 2021. WOLFGANG RATTAY/REUTERS

Ahrweiler, Germany — Extreme weather has brought wrenching scenes of devastation in western Europe. The scale of the deadly flooding that hit huge swathes of Germany and Belgium was still becoming clear on Monday.

More than 180 people were killed after record amounts of rain drenched the region. There were still about 700 people unaccounted for on Monday as shocked residents tried to pick up the pieces of their destroyed towns and villages. German Chancellor Angela Merkel has described the scenes as terrifying.CBS News Chris Livesay reported from the decimated Ahrweiler district in western Germany’s Rhineland-Palatinate state, where rescue operations were still underway on Monday as the local death toll hit 110.

The devastation is particularly jarring in a country with some of the most advanced infrastructure and warning systems in the world.

Bridges, homes, even large sections of entire villages have simply vanished, swept away by torrents of floodwater from rain-swollen rivers. Now it’s the death tolls swelling.

Asked if he ever imagined seeing something like this in his country, resident George Larscheid said certainly “not of this magnitude, not of this size.

“I don’t think anyone could have imagined something like this,” he said. “No one was prepared.”

Merkel, Germany’s leader, struggled to explain it. She told reporters she could, “almost say that the German language doesn’t have words for the destruction.”

Billions of dollars will be needed to rebuild in Germany alone, and some towns are likely gone for good.

Merkel and climate scientists have warned that extreme weather events like this are bound to repeat themselves, and more often.

“One flood isn’t an example of climate change,” said Merkel. “But if we look at the last events of recent years, decades, then they are simply more frequent than they were previously — so we must make an effort, a great effort.”

Mother Nature is rearing her head, but global warming is pushing her hand.