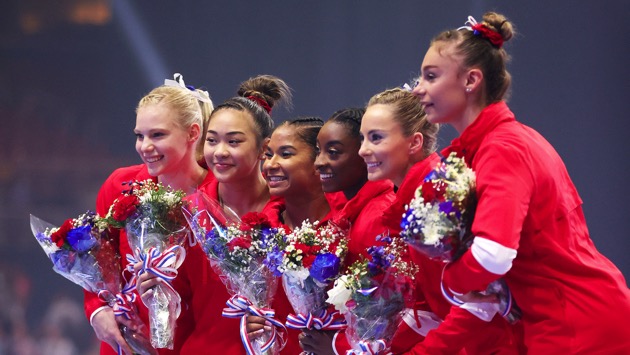 (NEW YORK) — The six athletes who will be part of the 2021 U.S. women’s Olympic gymnastics team were announced Sunday.

With the conclusion of the U.S. Olympic gymnastics trials in St. Louis, Missouri, came the announcement of the six women who will be heading to Tokyo this July.

Joining four-time Olympic gold medalist Simone Biles will be five first-time Olympians: Sunisa Lee, Jordan Chiles, Grace McCallum, Jade Carey and MyKayla Skinner. The first four will be participating in the team competition at the games while Carey and Skinner will be individual competitors.

Find out more about the gymnasts below.

Biles is widely considered to be the greatest gymnast of all time and is the most decorated in world championship history with 25 medals. The 24-year-old made history at the U.S. Gymnastics Championships earlier this month, where she won her seventh national women’s all-around title — the most wins by any American woman.

Biles also has four skills named after her, which means she was the first to perform the skills successfully in international competition. Two of the moves are on floor (Biles I and II) while the other two are on vault and beam (each called “The Biles”).

Following Biles in first place at the trials, Lee took second with 115.832 points. While the former did win the combined trials between Friday and Sunday, Lee bested Biles on Sunday night with a higher all-around score.

The 18-year-old is the youngest person on this year’s team but is no stranger to high-stakes competition. Lee is the national bar champion and has taken gold for beam at several national championships and at the 2019 World Championships.

After the Olympics, Lee plans to attend Auburn University in Alabama.

The 20-year-old moved to Texas in 2019 to train alongside Biles at her family’s gym, at the latter’s invitation. The duo have called each other everything from “sisters” to “partners in crime.”

Recently, Chiles took gold for the all-around, vault and floor exercise at the 2021 Winter Cup. She also took silver for beam, behind Lee who came in first.

Chiles has committed to the University of California Los Angeles.

McCallum came in fourth at the trials with 112.564 points. The 18-year-old’s most recent win was bronze for beam at the 2021 World Championships, and she also made world championship teams in 2018 and 2019.

McCallum has committed to the University of Utah and will attend after the Olympics.

Carey will be participating as an individual competitor in this year’s Olympics.

She secured her spot before the trials through new rules introduced this year by winning three world championship medals combined on vault and floor and owning the top spot in the World Cup standings in those events. The 21-year-old took silver in vault at the 2017 and 2019 World Championships, as well as silver on floor in 2017.

Carey committed to Oregon State University in 2017, and has deferred admission until after the Olympics.

Skinner is taking the second individual spot on this year’s Olympic team.

The 24-year-old was named as an alternate for the Rio Games in 2016 after finishing fourth in the all-around trials. After a three-year break to attend college at the University of Utah, where she was part of the NCAA women’s gymnastics team, Skinner made her comeback to elite gymnastics in 2019 in a bid to make it onto the 2020 Olympic team.