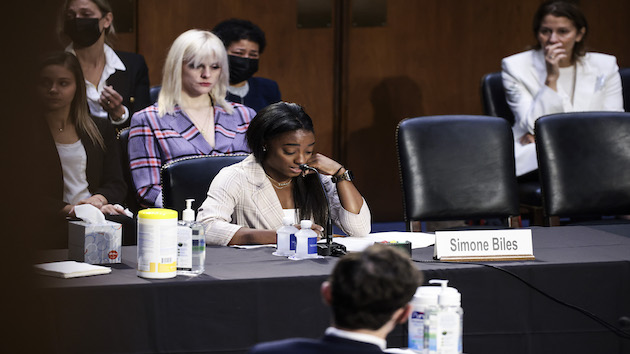 WASHINGTON, DC - SEPTEMBER 15: U.S. Olympic Gymnast Simone Biles gives testimony during a Senate Judiciary hearing about the Inspector General's report on the FBI handling of the Larry Nassar investigation of sexual abuse of Olympic gymnasts, on Capitol Hill on September 15, 2021 in Washington, DC. Biles and other fellow U.S. Gymnasts gave testimony on the abuse they experienced at the hand of Larry Nassar, the former US women's national gymnastics team doctor, and the FBI’s lack of urgency when handling their cases. (Photo by Anna Moneymaker/Getty Images)

(NEW YORK) — When U.S. gymnasts Simone Biles, McKayla Maroney, Maggie Nichols and Aly Raisman testified before Congress Wednesday, they painted a portrait of a system that failed them when they reported sexual abuse allegations against Larry Nassar, a former USA Gymnastics team doctor.

The gymnasts also shared a vivid picture of what it is like to recover emotionally from sexual abuse, and described how the system’s failures delayed their ongoing recovery.

“I personally don’t think that people realize how much experiencing a type of abuse is not something that one just suffers in the moment,” said Raisman, who testified against Nassar shortly before he was sentenced in 2018 to up to 175 years in prison for sexually assaulting hundreds of girls and women. “It carries on with them, sometimes for the rest of their lives.”

Testifying before the Senate Judiciary Committee, which is investigating the FBI’s handling of the Nassar allegations, Raisman continued, “For example, being here today is taking everything I have. My main concern is I hope I have the energy even to just walk out of here. I don’t think people realize how much it affects us.”

Maroney, who testified Wednesday that the FBI delayed documenting her claims against Nassar and then made false claims, at one point apologized to the senators for not answering more questions, saying she was exhausted after sharing her experience with them.

When Biles, a seven-time Olympic medalist, began her testimony, she told the senators, “To be perfectly honest, I can imagine no place I’d be less comfortable right now than sitting here in front of you sharing these comments.”

Biles — who paused several times in her testimony to hold back tears — tied her performance at this summer’s Tokyo Olympics to her struggle to recover mentally after being abused by Nassar. She dropped out of several competitions in Tokyo because of a mental health issue.

“As a recent competitor in the Tokyo Games who was a survivor of this horror, I can assure you the impacts of this man’s abuse are not over or ever forgotten,” Biles said. “The announcement in the spring of 2020 that the Tokyo Games were to be postponed for a year meant that I would be going to the gym, to training, to therapy, living daily among the reminders of this story for another 365 days.”

“As I have stated in the past, one thing that helped me push each and every day was the goal of not allowing this crisis to be ignored. I worked incredibly hard to make sure that my presence could maintain a connection between the failures and the competition at Tokyo 2020,” she continued. “That has proven to be an exceptionally difficult burden for me to carry, particularly when required to travel to Tokyo without the support of any of my family.”

Biles has also spoken previously about suffering from depression and having to take anxiety medication in the fallout of the Nassar abuse.

Raisman has said in the past that she suffers from post-traumatic stress disorder as a result of being sexually abused. In her testimony before Congress, she described exactly how that has impacted both her physical and emotional health.

“I used to train some days, seven hours a day when I was training for the Olympics, and processing my abuse affected me so much and it is still something I struggle with,” she said. “When I first shared my story publicly … I didn’t even have the energy to stand up in the shower. I would have to sit on the floor and wash my hair because standing up was too exhausting for me.”

“I couldn’t even go for a 10-minute walk outside, and this is someone — I’ve competed in two Olympic games,” Raisman continued. “There are times where I feel like I forget what I’m saying. I feel like my mind isn’t working. I feel like I have no energy at all. I’m 27 years old and my 80-year-old grandfather has more energy than I do.”

Raisman said she has had to be taken by ambulance for medical care after passing out because she is “so sick from just the trauma,” noting that it can at times hit her, “out of the blue.”

“I think it’s important for people to understand how much — even if we’re not crying — we are all struggling and how much survivors are suffering,” Raisman said, adding that delivering her testimony on Wednesday may be something that will take her “months” from which to recover.

Surviving sexual abuse as a child or as an adult can have lasting mental health complications, experts say.

One study published in the medical journal The Lancet found that among teenage girls who had been sexually assaulted, 80% went on to develop a mental health disorder.

According to RAINN, the Rape, Abuse & Incest National Network, around 70% of rape or sexual assault victims experience moderate to severe distress after the assault, which they say is a larger percentage than for any other violent crime.

Mental health complications from sexual assault may include everything from self-harm and eating disorders to panic attacks, depression, flashbacks, PTSD substance abuse and suicide, according to RAINN.

If you or someone you know is in need of help, the National Sexual Assault Hotline — 800-656-HOPE — is free, confidential and available 24 hours a day, seven days a week. You can also use the hotline’s chat online option.