Smoke from fires in the West affecting air quality in cities more than 1,000 miles away 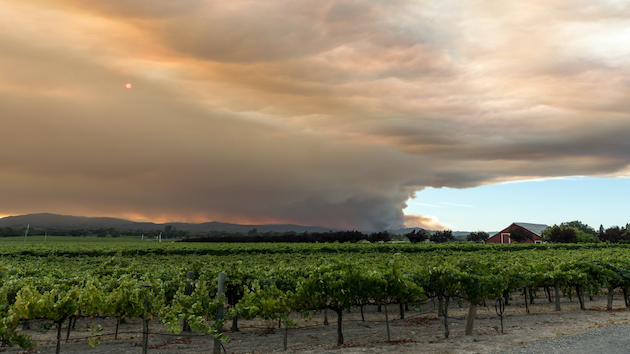 (SAN FRANCISCO) —The dangerous wildfires burning in the West is affecting air quality in cities more than 1,000 miles away as the smoke billows and travels east.

More than 100 large wildfires are currently burning in the West, with the overwhelming majority located from California to Montana. But the smoke is drifting across much of the rest of the country.

While photos show thick plumes of cloud over regions in California, landscapes near Denver, more than 1,200 miles away, show blankets of haze in the air.

Whether the smoke filters down to the surface, where residents can breathe the particulate matters within it, depends on other atmosphere conditions. It is possible to see haze or smoke in the sky but have overall healthy air.

The smoke is expected to travel down on Monday, producing unhealthy air quality from California to Colorado and much of the Rocky Mountains.

On Saturday afternoon, Denver had the worst quality ranking in the world, according to IQ Air, a data tool that measures and ranks air quality in cities around the world. Denver remained in the second spot on Sunday afternoon.

As of Monday morning, Salt Lake City ranked No. 6 on the list, while Denver came in at No. 10.

The dangerous cycle of drought, heat and wildfires is continuing in the West as another potentially record-breaking heat wave makes it way toward the Northwest.

Temperatures in the West will surpass 100 degrees toward the middle of the week. Triple-digit temperatures are also expected in Portland and parts of Washington. The region already experienced a record-shattering deadly heat wave in late June.

The heat will not help conditions from Northern California to Oregon, where fires are continuing to ravage communities.

The Dixie Fire, now the second-largest fire in California history after it sparked near the Feather River Canyon on July 13, has scorched nearly 490,000 acres and is still just 21% contained.

More than 627 structures, including almost the entire downtown area of Greenville, California, about 150 miles northeast of Sacramento, have been destroyed by the Dixie Fire.

Firefighters had previously made progress on containing the Dixie Fire, but the fire re-exploded after jumping containment lines last week amid dangerous fire conditions.

The Dixie Fire has gotten so bad that firefighters are using flames to singe dry vegetation and eliminate fuels around the containment lines, video from Westwood, California, shows.