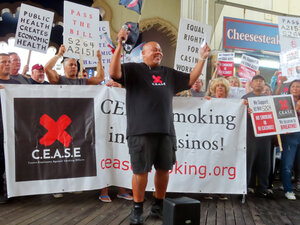 Casino dealer Lamont speaks at a rally by smoking opponents outside the Hard Rock casino, Thursday, Sept. 22, 2022, in Atlantic City N.J., after New Jersey Gov. Phil Murphy spoke to a major casino industry conference. A bill that would ban smoking in casinos -virtually the only indoor workplace where it is allowed - is stalled in the New Jersey Legislature, even though Murphy has said he will sign it if it passes. (AP Photo/Wayne Parry)

ATLANTIC CITY, N.J. (AP) — Irate that a session to discuss a proposed smoking ban during a major casino industry conference was snuffed out, casino workers and patrons opposed to smoking in the gambling halls held a noisy protest outside the meeting Thursday.

About 100 people rallied in the rain underneath a walkway outside the Hard Rock casino, demanding that the state Legislature act on a bill to ban casino smoking that has the support of more than half of state lawmakers and Gov. Phil Murphy.

The bill has been stalled without a hearing in a state Senate or Assembly committee, and a similar measure died without a vote last year as well.

Thursday afternoon, the East Coast Gaming Congress was to have included a panel discussion on casino smoking, an issue that is roiling workers, customers and lawmakers not only in New Jersey but in states including Rhode Island, Pennsylvania and others.

“The CANJ is running and hiding right now,” said Peter Naccarelli, a Borgata dealer and a leader of a push by casino workers to ban smoking in their workplaces. “They have no logical arguments.”

Giannantonio declined comment on Thursday’s demonstration, referring a reporter to a statement the casino association issued earlier this month in which it said “an immediate smoking ban would have a significant adverse effect on Atlantic City.”

Murphy, the state’s Democratic governor, has promised to sign the bill if it passes. But Legislative leaders have thus far refused to set a hearing date for a committee in either the Senate or Assembly, which has to happen before the bill can move forward.

Murphy addressed Thursday’s conference, but did not mention the proposed ban in any detail.

But during an afternoon session, Eric Hausler, CEO of Greenwood Racing, which owns Pennsylvania’s smoke-free Parx casino, said that policy has been successful.

When reopening in 2020 after the initial wave of the pandemic, Hausler said, Parx decided to remain smoke-free, “for better or worse. If you look at our market share numbers, they’re holding up just fine. We intend to stay that way. Our customers have gotten used to it.”