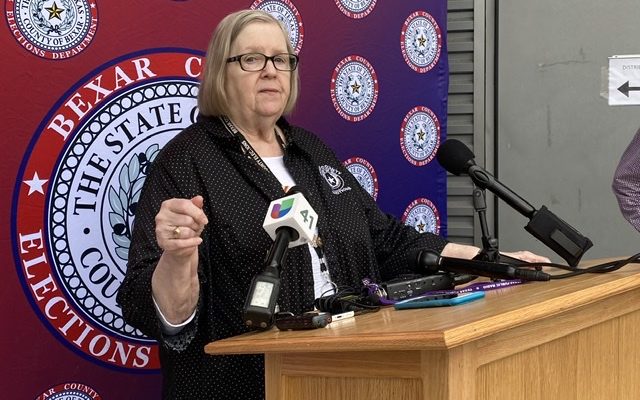 SAN ANTONIO (KTSA News) – Issues with printers delayed some voters at dozens of polling sites in Bexar County, and at one location, the power was out.

Bexar County Elections Administrator Jacque Callanen says the printer problem was due to the cables not being properly connected.

“It took awhile.  I mean, I’m the first to admit it took awhile for us to get those computer changes,” said Callanen.

She says the issue at 30-50 locations has been resolved, but the Copernicus Community Center location remained without power as of 11 a.m.  However, Callanen said voting machines at Copernicus were operating on battery power.

Bexar County Commissioner Tommy Calvert was getting reports from poll monitors with the non-partisan group Common Cause about problems at James Bode Recreation Center, Lowell Middle School, Coppernicus and several other locations.

“About 40 percent of the locations that did not work are in my precinct and that does not make me happy at all,” Calvert told KTSA News.

Calvert wanted Callanen to extend voting hours beyond 7 pm at the polling sites that were affected, and he said voting rights groups were prepared to sue the county to make that happen.

“We should have had backup equipment.  It’s just not right, and if the lawyers have to hold the County accountable, so be it,” he said.

Callanen says the polls will close at 7 pm, and as long as you’re in line by 7, you’ll get to cast your ballot.

You can report problems to the Bexar County Elections Department at 335-VOTE or a national hotline at 866-OUR-VOTE.

Callanen said more than 20,000 voters had cast their ballots during the first few hours Tuesday morning  and she’s expecting a record turnout in Bexar County for the Texas Primary.

She said some voters are upset because they voted early for a candidate who recently dropped out of the presidential race and they want a do over, which is not allowed.   You cannot vote again.

For those who are new to the Texas Primary, you must choose a Republican or Democratic ballot.

Callanen says some people start to vote and then realize the candidates they support are not on the ballot.

“They look through it and they don’t see that person, so they eject that card, they go back to the qualifying table, and at that point, the election judges have to call us down here at election central to release that voter,” Callanen explained. “It’s an interesting thing to watch that people know the names of the candidate, but the party.”