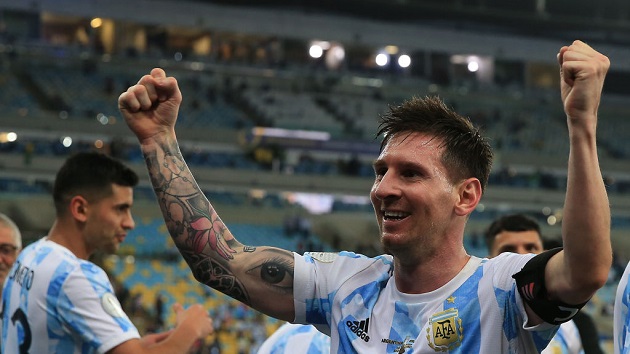 (NEW YORK) — Lionel Messi and Barcelona have reached a new 5-year agreement for Messi to remain with the club according to an ESPN report. The report also says that Messi will be taking a significant pay cut to remain with the team.

The deal comes almost a year after Messi, widely considered to be one of the greatest players of all time, submitted a letter to Barcelona announcing his intentions to leave the team. He withdrew the letter shortly thereafter, but was unable to reach an agreement with the Catalan club to the point where he entered free agency on July 1.

Barcelona is facing a harsh financial reality at the moment with more than €1 billion in debt, likely the reason for Messi’s pay cut.

The Argentinian forward has played for Barcelona since entering their youth academy in 2000 as a 13-year-old. Messi made his first team debut in a friendly against Porto in 2003 and since then, has broken a number of club and international records.

Messi has scored 672 goals in 778 appearances for the team, leading the club in both stats. On top of that, he’s one of the most decorated players of all time. He won the Golden Ball award for the best player at the 2014 World Cup and has also won 6 Ballon D’Or awards given to the player voted as the best in the world.

Messi’s ascendance also ushered in a golden age for Barcelona as a team. He led the squad to 10 La Liga titles, 4 Champions League trophies, and 7 Copa Del Rey championships. The Argentinian also won his first international trophy this summer, guiding his home country to a Copa America title, Argentina’s first since 1993.