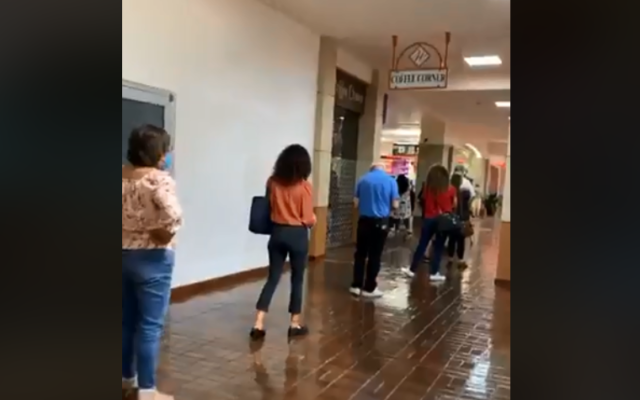 Some voters at Wonderland of the Americas waited nearly 6 hours to cast their ballots on the first day of early voting Oct. 13, 2020/KTSA Photo-Elizabeth Ruiz

SAN ANTONIO (KTSA News) – Some voters at Wonderland of the  Americas waited in line nearly 6 hours to cast their ballots on the first day of early voting in the Nov. 3 election.

“Woo hoo!” shouted Fernando Martinez as he walked out of the mall with raised fists.  “I voted.  I did it!”

For Martinez, the long wait was worth it.

“I just had to vote on the first day of early voting.  I didn’t want to wait,” he said.

The lines wrapped around the department stores, the food court and the Bijou Theatre.   If the movie theatre were open, it would be possible to watch a movie, get back in line and wait another while before reaching the voting station.  People in the crowd told KTSA News they made new friends who held their places in line if they had to use the restroom or get something to eat.  Three young women were playing cards and many were texting or catching up on some work while they waited.

“We’re playing Go Fish,” said one of the teens who was waiting to vote for the first time.

Masks are not required, but strongly encouraged.  Nearly all were wearing them as they waited in line and one couple wore patriotic masks.  They were about almost at the voting booth after waiting 5 1/2 hours.

“I told my husband, if he passes out, I’m dragging him in there to vote,” she said.