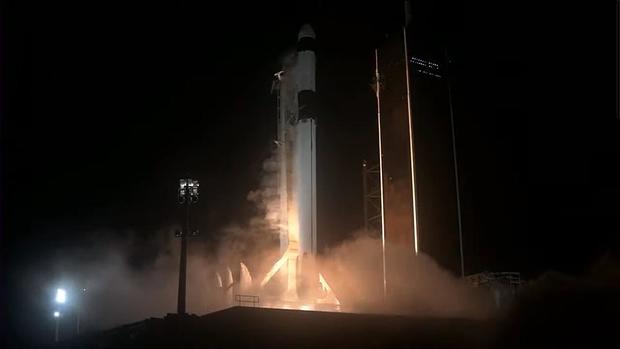 An all-new Falcon 9 rocket fires up its nine first stage engines and climbs away from pad 39A at the Kennedy Space Center early Tuesday, kicking off a supply run to the International Space Station. Along with equipment and supplies, the Dragon cargo ship atop the rocket also carried Christmas gifts and fresh food for the station's seven-member crews. SpaceX

SpaceX capped its busiest year ever early on Tuesday, launching its 31st and final Falcon 9 rocket of 2021. This one boosted a Dragon cargo ship into orbit loaded with supplies, equipment and Christmas presents for the International Space Station crew.

It was only the second all-new Falcon 9 to fly in 2021 as SpaceX capitalizes on its reusable rocket technology, which company officials say is crucial for lowering launch costs and increasing schedule flexibility.

“It’s been a record-breaking year for SpaceX,” said Sarah Walker, the company’s director of mission management. “Reusability is key to lowering the cost of spaceflight, which enables more investments in critical scientific research.”

Tuesday’s launch was the company’s 24th space station resupply mission overall, the third this year and the sixth flight of a Dragon capsule in 2021, including three crewed missions, two to the space station and one fully commercial flight to orbit.

“Looking ahead to the next year, we have several more missions to the space station with crew and cargo, including the first fully commercial human spaceflight mission to ISS,” Walker said, referring to a February flight sponsored by Houston-based Axiom. “So a really exciting year in 2022 as well.”

Just three days after launching two Falcon 9s on Saturday, one from California and the other from the Cape Canaveral Space Force Station, the final flight of the year got under way at 5:07 a.m. Eastern on Tuesday when the rocket’s engines ignited for the first time atop historic pad 39A at the Kennedy Space Center.

After propelling the vehicle out of the thick lower atmosphere, the first stage fell away and flew itself to a pinpoint landing on an offshore droneship, chalking up SpaceX’s 100th booster recovery, and its 77th at sea.

A few seconds earlier, the second stage reached orbit and the cargo Dragon was released to fly on its own. If all goes well, the spacecraft will catch up with the space station early Wednesday, moving in for docking at the space-facing port of the forward Harmony module at 4:30 a.m.

The end-of-year launch surge comes amid an apparent outbreak of coronavirus at SpaceX’s Hawthorne, California, headquarters.

The New York Times, following up on data posted by Los Angeles County and first reported by the Los Angeles Times, said at least 132 of roughly 6,000 employees had tested positive, the most reported at any private company in the United States.

The company did not respond to a request for comment and it wasn’t clear on Tuesday morning what impact, if any, the reported outbreak might have. But Tuesday’s launch, like the 30 before it this year, went off without a hitch.

Loaded with 6,590 pounds of equipment and supplies, the cargo Dragon is also carrying Christmas presents and fresh food for the station’s seven-member crew.

“Every year, we do our best to send up some some presents to the crew,” said Joel Montalbano, manager of the space station program at the Johnson Space Center in Houston. “I won’t get in front of Santa Claus and tell you what’s (on board), but we are going to have some gifts for the crew.

“We’re also going to find some special food for for Christmas dinner. So you can imagine turkey, green beans, we have some some some fish and some some seafood that’s smoked. We also have everybody’s favorite, fruitcake… for the crew.”