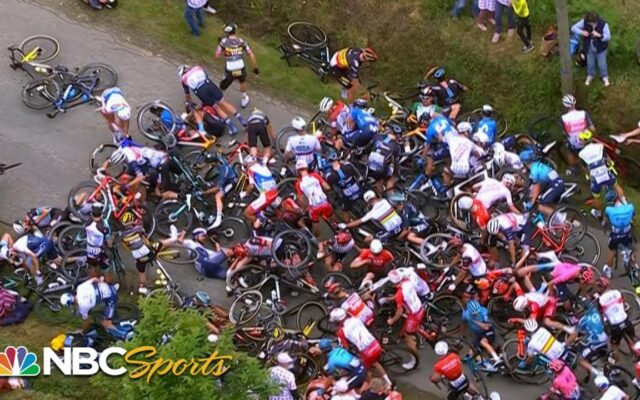 A spectator at the Tour de France who caused a massive crash involving dozens of cyclists is missing as race authorities plan to sue her. Tour de France deputy director Pierre-Yves Thouault told the AFP news agency they plan to sue the woman “so that the tiny minority of people who do this don’t spoil the show for everyone. ”
However, French publication Ouest-France reported the woman, who is believed to be German, got on a flight and is untraceable, according to CBS Sports.

Video shows the woman, who held a long banner on the sidelines of the race, stick the banner out a little too far, causing German cyclist Tony Martin to bike right into it. Martin fell, setting off a domino effect for competitors as cyclists behind him also fell.

GREAT TO SEE SPECTATORS BACK INVOLVED IN SPORTS EH pic.twitter.com/Kwxj8be2Qh

The sign was a hello message for the woman’s grandparents, CBS Sports reports. She appeared to hold the sign out so it was in the view of cameras – but it blocked part of the road.

▶ Watch Video: A spectator’s sign caused a crash at the Tour de France. Now officials want to sue her.

Following the crash, the Tour de France Twitter page put out a public service announcement, urging in-person spectators not to “risk everything for a photo or to get on television!”

But for the Tour to be a success, respect the safety of the riders!

Don't risk everything for a photo or to get on television! pic.twitter.com/eA6nnhRhWv

The crash caused by the spectator’s sign was just the first of opening day. German cyclist Jasha Suetterlin was the first rider to leave the race after the crash and a second accident brought down several others, Reuters reports. French cyclist Julian Alaphilippe went on to win the first stage of the 21-stage race, crossing the finish line with blood dripping from his knee.