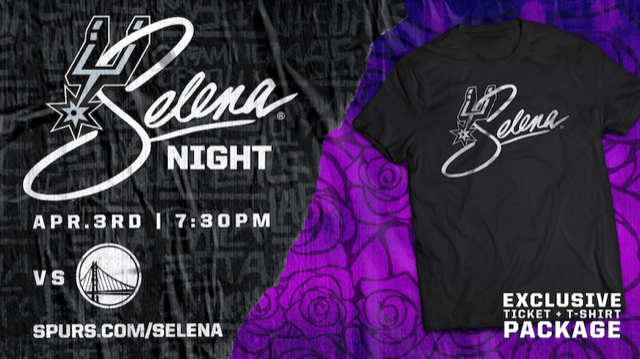 SAN ANTONIO (KTSA News)  – If you’ve been to a Spurs game at the AT&T Center, you know how much the fans enjoy dancing and singing along to ”Bidi Bidi Bom Bom” and other Selena songs. Now the Spurs are planning Selena Night April 3 in honor of the late Tejano music queen.

”Having the Spurs reach out with this amazing idea to honor Selena was exciting to say the least,” said Suzette Quintanilla, CEO of Q Productions. “I have been to Spurs games and have witnessed first-hand how Spurs fans get pumped up and love to sing along and dance when they hear our music. It just makes sense – it’s a Texas thing.”

When  San Antonio hosts the Golden State Warriors April 3,  the local franchise will launch a 20-piece Spurs x Selena line  of men’s and women’s clothing, caps, and other items.

”The legacy of Selena goes far beyond music,” said Becky Kimbro, Spurs Sports & Entertainment Vice President of Strategic Brand Engagement. “She continues to inspire generations of fans to celebrate culture and connect with each other – both of which are central pillars of the Spurs experience”

Tickets for the 7:30 p.m. game against the Golden State Warriors April 3 are available now at Spurs, com.   The  first 10,000 fans in attendance on Selena Night will receive a commemorative Selena x Spurs rally towel.

During halftime, speed painter David Garibaldi will create a painting of the music icon to be auctioned in support of Silver & Black Give Back and the Selena Foundation.