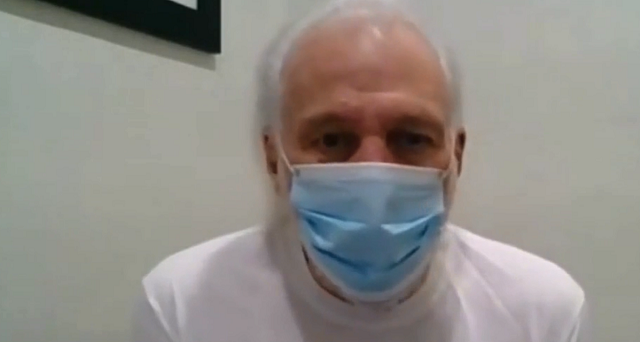 SAN ANTONIO (KTSA News) -Spurs coach Gregg Popovich laid into President Trump and others who he accused of not taking masks seriously in the fight against COVID-19.

At a post-practice media session Monday afternoon, Popovich said he’s disappointed in the “fiber of our populous” where some think more about themselves than about the community.

“It’s just beyond my comprehension how somebody can talk about not wearing a mask shows that you’re for freedom, and you’re for America, and you’re for personal choice when it has nothing to do with that,” Popovich said at a Zoom news conference Monday afternoon.

The Spurs coach, who has never held back when asked about political issues, said we’re all in this together emotionally and intellectually.

He also criticized President Trump’s handling of the pandemic with the death toll continuing to rise.  Popovich accused Trump him of spreading lies and playing golf.

“It’s sad, but soon it will be over.  We just hope he doesn’t burn the whole thing down on his way out,” said Popovich.