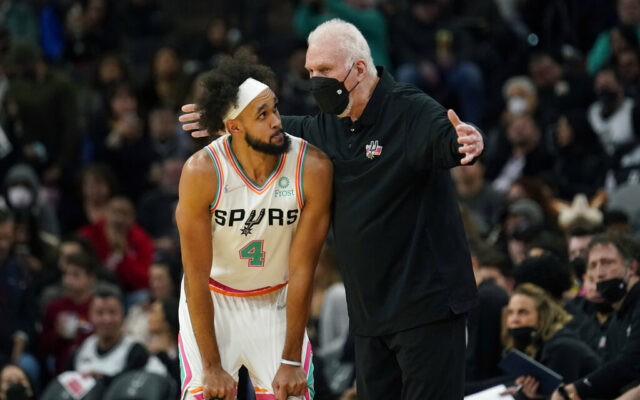 SAN ANTONIO (KTSA News) — The San Antonio Spurs made moves down to the wire as the NBA trade deadline expired on Thursday.

The day began with the news that Thaddeus Young, Drew Eubanks and their 2022 second-round pick from Detroit would head to the Toronto Raptors for Goran Dragic and a 2022 first-round protected pick.

The Silver and Black snagged an additional first-round pick by way of the Boston Celtics. The Spurs agreed to trade Derrick White for John Richardson, Romeo Langford, a top-4 protected 2022 first-round pick, and a 2028 pick swap.

NBA All-Star Dejounte Murray tweeted his shock at the trade.

The deadline caps a busy month of trades for the Spurs.

On January 18, the Spurs traded Bryn Forbes to the Denver Nuggets in a three-team deal where the Nuggets’ Juancho Hernangomez came to San Antonio, Forbes to Denver and the Nuggets’ Bol Bol and P.J. Dozier went to Boston.

Hernangomez played in 5 games for the Silver and Black, averaging 1.4 points and 3 rebounds.