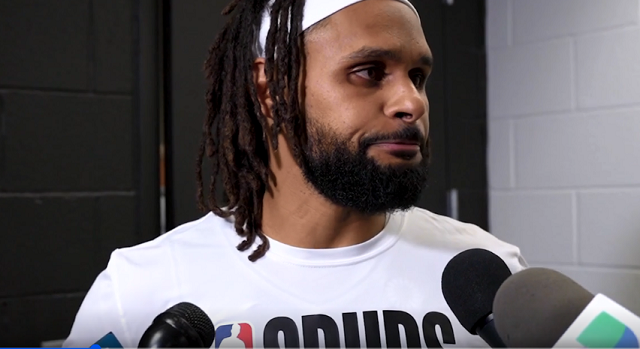 SAN ANTONIO (KTSA News) – “My homeland is burning.” That’s what Spurs point guard Patty Mills tweeted about the wildfires in his homeland of Australia.

Mills has dedicated his Twitter page to providing updates and raising awareness about the deadly fires that have devastated parts of Australia, killing more than 20 people and consuming millions of acres.

“It’s very devastating,” said Mills. “It’s one of those disasters and a national crisis that’s hard to comprehend,” he said.

The footage is scary. The damage is devastating.

A fire tornado tears through Kangaroo Island in South Australia as tens of thousands of Koalas are feared dead.

The population of koalas on Kangaroo Island before this disaster was last estimated at 50,000. #australiaisburning pic.twitter.com/OcMThaLNNA

Mills admits he feels a little helpless being so far away, but he continues to keep an eye on the latest developments and uses social media to provide links to organizations that are helping raise funds to help Australians affected by the massive fires.

“That’s what I’m trying to do is use my voice and use my platform to bring awareness to this national crisis,” he told reporters.

He said it’s what helps him sleep at night and do his job. Monday night, Mills came off the bench and drained six 3-pointers to help the Spurs beat the Milwaukee Bucks 126-104.

Mills also is concerned about millions of animals affected by the fire, including koalas, wallabies and kangaroos.

“The animals of Australia play a big part in our identity throughout the entire world, and for us to lose that would be very sad,” he said.

480 million is a staggering number of animals affected by these wildfires. For anyone looking to help our wildlife that have survived these devastating blows, the link to WIRES – Emergency Fund for Wildlife is below. https://t.co/iCoHXi0GH5#australiaisburning pic.twitter.com/GUj2WLZ6Zu

“Australia’s going through some tough times now and we’ll get through it as Aussies do, but I think the lesson here is if everyone can learn from this on a global stage and prevent it from happening in their own country, I think that’s the goal.”