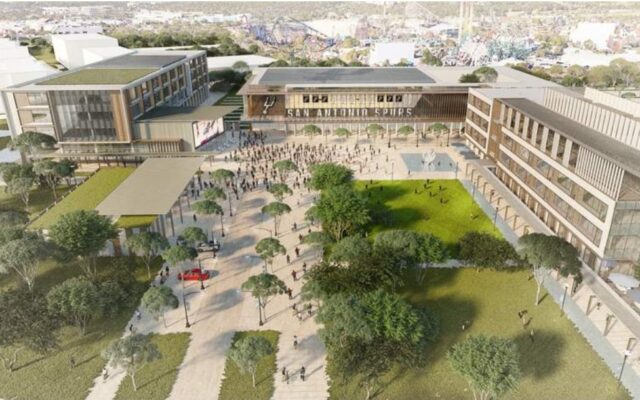 The project dubbed the Human Performance Campus will be located near Loop 1604 and Interstate 10 near the Shops at La Cantera and Six Flags Fiesta Texas.

The Human Performance Campus on the city’s northwest side will include training facilities, medical and research offices, commercial areas in addition to a park and outdoor plaza.

Spurs executives told the court the development will cost an estimated $510.8 million, stretch across more than 500,000 sq. ft. and employ more than 1,700 full-time employees. They said the campus will be used 365 days per year for community events.

“We’ve been working together to build a campus that would bring people from around our community, from around our region, to take advantage of the elite environment that we have — across military, across medical, across technology, across elite sports — and have a gathering place for not only research and development around human factors but also community engagement in parks, in community spaces,” Spurs CEO R.C. Buford said.

County commissions approved a $15 million donation to the project and accepted the donation of a 22-acre public park under development by USAA Real Estate next to La Cantera.

The public park is planned to open by the end of the year. The park will feature the largest dog park in the county and will connect to the Valero trailhead of the Howard W. Peak Greenway Trail System. Officials said the park will be managed by the county.

“This is our collaborative vision over many, many months, and many years,” Bobby Perez, executive vice president and general counsel of Spurs Sports & Entertainment, said. “This location right here becomes our home and our place that we’re putting our flag in the ground for decades.

The project is expected to break ground in October.

33 mins ago
Connect With Us Listen To Us On