SRX smashes its way to theatrical close of inaugural season 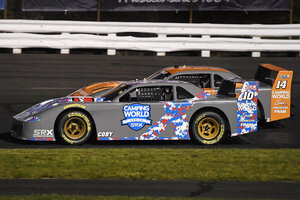 Tony Stewart was like everyone else in U.S. motorsports this week, frequently checking social media to see Paul Tracy’s latest theatrics in a one-sided war against NASCAR golden girl Hailie Deegan.

Tracy has been furious — or could he just be playing the heel in a made-for-TV racing league? — because 19-year-old Deegan had the audacity to spin him at Slinger Speedway in Wisconsin last week in the fifth round of the Superstar Racing Experience. The NBC Sports IndyCar analyst and former bad boy driver has milked the feud ever since, using Instagram as his preferred platform.

“It’s got me watching, looking every time he’s posted something new,” said Stewart, who along with fellow NASCAR Hall of Famer Ray Evernham is credited with creating SRX.

The six-race series of somewhat randomly collected drivers from various forms of motorsports has entertained America by racing at grassroots short tracks across the country in a two-hour Saturday night show on CBS. The network had nothing to lose since hardly anyone is watching TV on a summer weekend night.

But people watched. A lot of people, actually, with more than a million tuning in to watch this hodgepodge group of former greats, up-and-comers and local ringers. Up next is a star-studded Saturday night finale at the old Nashville Fairgrounds Speedway in Tennessee, where reigning NASCAR champion Chase Elliott will race against his Hall of Fame father, Bill.

Chase beat his dad in their only other matchup, a 2013 late model race in Alabama. Odds are he will get the best of the 65-year-old again even though his father is an SRX regular. Bill Elliott has been racing with an injured hand since a crash three races ago but it is a rare chance to see father and son NASCAR champions race one another.

Back for her third race is Deegan, a regular in NASCAR’s Truck Series who joined SRX for two races as a fill-in when former Indianapolis 500 winner Tony Kanaan raced in Brazil.

With over 1 million Instagram followers, Deegan is probably the most popular among the general public of all the drivers in the field so SRX gave her another spot for the finale, even though Kanaan is also racing. Tracy’s antics haven’t hurt the buzz, either.

“I don’t know Paul well enough to know whether everything he’s posting is the gospel of what he’s feeling or if he’s just playing a role,” Stewart said. “He’s added a lot of excitement and carried the torch for everybody in that category. In the big picture, I think he’s great for SRX.”

Tracy has certainly added the personality element he’s long believed has vanished since his generation of renegade open-wheel racers retired. The 52-year-old Canadian understands what gets the public’s attention and he has gladly done his part.

“Fans are tired of boring drivers who have nothing interesting to say,” Tracy said. “They want rivalries and drama and colorful characters. That’s what helps motorsports gain attention.”

The SRX villain has also been an aggressive driver and Evernham’s crew — assembled to rebuild these single-purpose cars — has been busy. Evernham said Tracy also gave all 50 crew members $50 gift cards for a night out.

“Paul is different things to different people, and I don’t have him totally figured out,” Evernham said. “But you need a guy like that and he was one of the first guys to jump in and support us. I told everybody who has come into this series ‘Bring your personality, I am not going to censor you.’”

The co-creators call SRX “motorsports entertainment” and that could fall anywhere on the scale from an unsanctioned race to a carnival with cars. Who knows what the rules are, and who would even enforce them? There is a championship point fund with a payout, and drivers are paid a flat per-race fee, but if the racing is fake they are doing a masterful job of actually caring about the results.

Helio Castroneves, not two months removed from his record-tying fourth Indianapolis 500 victory, angrily jawed with Scott Speed after a race, maybe it’s because there is money on the line.

Evernham and Stewart both claimed not to actually know how much money will be doled out to “full season” drivers; Evernham wasn’t sure if the $500,000 to the champion rumor was true or if that sum is split between the top three in the standings. SRX has a deal through next season with CBS and Evernham wants the series to eventually pay $1 million to the champion.

Stewart is the championship leader and it would be an upset if he didn’t win the title. The cars and the tracks suit him and the 50-year-old three-time NASCAR champion is the most adaptable driver in the field.

Castroneves was fighting for runner-up in the standings, but last week’s surprise win by Marco Andretti shuffled the order and gave Andretti a massive morale boost. Andretti gave up full-time IndyCar racing this year, saying it was not fun anymore and with no wins since 2011.

Now he races what he wants and Andretti rarely has appeared as carefree as he is at SRX. He’s also going to run IMSA sports cars soon and is open to a NASCAR Xfinity Series opportunity, so SRX might have been the jumpstart Andretti needed for his career.

The series was designed to be a little bit of everything — SRX has made adjustments based on fan feedback since its debut race — and its David vs. Goliath angle has been rewarded three times. Doug Coby won the SRX opener as the home-track ringer at Stafford Motor Speedway in Connecticut; it earned Coby his first career NASCAR start in September in the Truck Series race at Bristol.

Seven-time Trans Am champion Ernie Francis Jr. earned the most attention of his career when the 23-year-old won at Indianapolis and 17-year-old Luke Fenhaus gained national recognition despite losing to Andretti on a questionable final restart.

This weekend, Chase Elliott will be SRX’s biggest draw of the season and his father thinks an upset is unlikely. Still, Evernham wouldn’t rule out a strong close from the driver who drove for him during his final three full-time NASCAR seasons.

“Bill has lost his confidence,” Evernham said. “We’ve got to get him going. I would not count him out completely if I could get him fired up.”