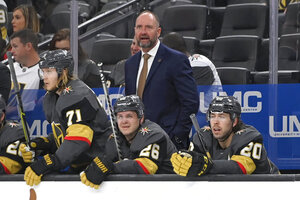 FILE - Vegas Golden Knights coach Peter DeBoer watches from the bench during the third period of the team's NHL hockey game against the Nashville Predators on Thursday, March 24, 2022, in Las Vegas. The Dallas Stars announced Tuesday, June 21, 2022, that they have hired Peter DeBoer as their new coach, a month after he was fired by the Vegas Golden Knights. (AP Photo/David Becker, File)

The Dallas Stars announced Peter DeBoer will be their new coach on Tuesday, a month after he was fired by the Vegas Golden Knights.

DeBoer, who previously led New Jersey and San Jose to the Stanley Cup Final in his first season with both of those clubs, was let go by the Knights after they missed the playoffs for the first time in the franchise’s five-season history. He had been their coach for 2½ seasons after replacing Gerard Gallant, who took Vegas to the Stanley Cup Final in its inaugural 2017-18 season and back to the playoffs in 2019.

Dallas was in the Stanley Cup Final two summers ago with Rick Bowness as their interim head coach before he got a two-year contract that went through this season. Bowness was 89-62-26 with two playoff appearances in his nearly three seasons.

“Pete brings a wealth of experience to our dressing room, and we’re thrilled to name him our next head coach,” Stars general manager Jim Nill said. “Every team that he has taken over has not only shown immediate improvement but has been ultra-competitive in the Stanley Cup playoffs. … His resume displays the high standards he sets and his ability to get his team to play up to that level consistently.”

DeBoer will be the fifth coach for the Stars since Jim Nill became their general manager in April 2013. DeBoer follows Lindy Ruff, Ken Hitchcock, Jim Montgomery and Bowness.