Stars in Stanley Cup Final after being outscored and outshot 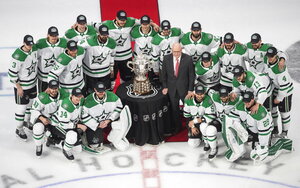 The Dallas Stars were mired in a six-game losing streak when the season was paused for 4 1/2 months because of the coronavirus pandemic, and have been outscored and outshot since getting inside the NHL bubble.

Yet now they are one of only three teams still playing, already set for their first Stanley Cup Final since 2000.

With their captain and two rookies scoring goals in another comeback, the Stars wrapped up the best-of-seven Western Conference Final in five games with a 3-2 overtime victory against the top-seeded Vegas Golden Knights.

“We’re not going home!” goaltender Anton Khudobin screamed after his 34-save performance in the clincher.

From their miserable 1-7-1 start to the season way back in October, to an unexpected coaching change for off-ice issues in December after they were back on the winning track, and then that 0-4-2 span into mid-March, these Stars still have a chance to win their second Stanley Cup championship.

Tampa Bay took a 3-1 series lead over the New York Islanders into Game 5 of the Eastern Conference final on Tuesday night, also in Edmonton.

Dallas trailed 2-0 in the opening seconds of the third period Monday night, and finally got on the board with Benn’s goal midway through the period.

Joel Kiviranta, whose OT goal in Game 7 of the second-round clincher over Colorado capped his hat trick, then tied the game with 3:47 left. Denis Gurianov scored the game-winner on a one-timer during a power play 3:36 into overtime.

“We’ve done this all year. We’ve come back from behind all year,” interim coach Rick Bowness said. “Down 2-0, there was no panic. We just were a very confident group that we could respond to the challenge.”

The finale against the Golden Knights marked the fifth time this postseason Dallas came back to win when trailing after the first period — and the third time to win when trailing after two periods. The Stars have also won six games after giving up the first goal, two short of the franchise record set by their 1999 Stanley Cup-winning team. They are 5-0 in overtime, and 10-1 in one-goal games.

The Stars finished the Western Conference Final with 118 shots on goal — 48 fewer than Vegas had in the five games. In their 21 postseason games overall, they have been outscored 64-62, making them the first team to enter the Stanley Cup Final with a negative goal differential in the postseason since the 1968 St. Louis Blues.

“We’re a confident group,” Tyler Seguin said. “There’s no panic, there’s composure. There’s just knowing that we’re going to get the job done, and it starts one shift at a time, and we have key goals at big moments, and everything’s falling in our favor right now. We’ve just have to keep going.”

The 65-year-old Bowness, who joined the Stars as an assistant coach before the 2018-19 season, became the interim head coach in December after second-year head coach Jim Montgomery was fired. Montgomery, who took the Stars to the second round of the playoffs and a double-overtime Game 7 loss to eventual Stanley Cup champion St. Louis in his only full season, later entered alcohol rehabilitation.

“Bones is a big part of this team,” Benn said. “It’s been a crazy year for all of us, and I’m sure especially him.”

When the Stars beat the Nashville Predators 4-2 before a crowd of 85,630 outdoors at Cotton Bowl Stadium in Dallas on New Year’s Day, Bowness joined Pat Quinn and Scotty Bowman as the only coaches in NHL history to be on the bench in parts of five decades.

Bowness is now in his third Stanley Cup Final in 10 seasons, his first in charge. He was on Tampa Bay’s staff five years ago when the Lightning — a potential opponent this year — last made it, and with Vancouver in 2011.

“It’s a feeling you can’t describe,” Bowness said. “You only get so many cracks at going to the Stanley Cup finals and you’ve got to take advantage of it. For me as a coach, it’s just gratifying for the players. They worked so hard.”