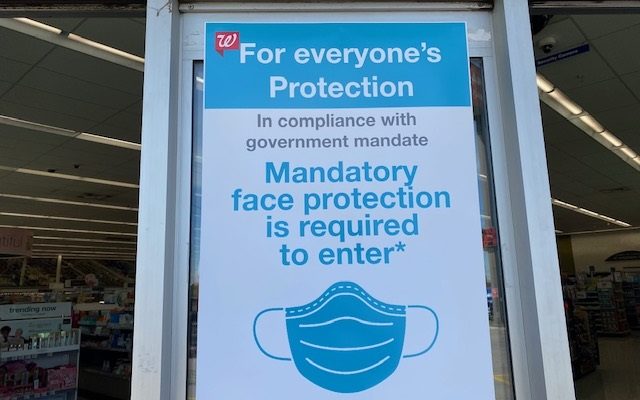 SAN ANTONIO (KTSA News) – If you have to go to a store in San Antonio, don’t forget your face covering.

Walgreens on IH 35 at O’Connor has a sign posted at the entrance that reads “Mandatory face protection is required to enter.”

H-E-B on Nacogdoches Road at O’Connor  had an employee at the entrance asking people to put on a face covering before going into the store.  A woman was not allowed to go in because she wasn’t wearing a mask, but she went back to her car and got it.

” I think it’s a waste of time because they’re not the N94 masks, so it’s not really doing anybody good, except for psychologically,” a woman told KTSA News as she prepared to enter the store with her cloth mask. “There’s nothing I can do about it, and I want some sodas.”

A nearby Petco store displayed a sign at the entrance. (Don’t worry.  It doesn’t apply to pets).

At the Walmart on Thousand Oaks, a young woman who was planning to shop with her sister was not allowed to enter without a face covering.

“She doesn’t like going into stores by herself,” the woman said as she was walking back to their car, but she wasn’t angry. “No, I totally understand.”

A man wearing a bandana over his nose and mouth said,” I never thought that this would happen in America.  I know it happened in China, but not here in America.”

At the Home Depot in Windcrest, a man went back to his vehicle, got a white t-shirt and wrapped it around his face so that he could go into the store.  Another customer told me he had just purchased his mask at a nearby Habitat for Humanity ReStore.

“I’m from Driftwood, Texas southwest of Austin.  I was unaware of the mask deal,” he said.

The order mandating masks where social distancing is difficult or not possible went into effect at midnight.

“It’s kind of inconvenient, but I understand the reasoning behind it,” said the man from Driftwood.

Another shopper jokingly said,” I think it’s great a great idea to wear a mask.  Damn right, if I wanted to rob somebody, I’d have a mask on already.  I love that.”

Starting Wednesday, VIA will require passengers to wear face coverings.