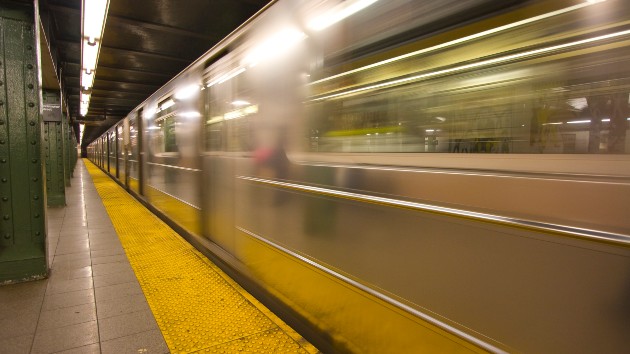 (NEW YORK) — A New York City subway derailed and saw significant damage Sunday morning after someone allegedly threw debris onto the track, according to investigators and officials.

The northbound “A” train was coming into a stop at the 14th Street station in Manhattan when it struck the debris and its first car scraped four columns, according to New York City Transit Interim President Sarah Feinberg.

“At this time, the cause of the incident appears to be an act of vandalism,” she said in a statement.

There were 134 passengers on the train — no major injuries were reported and the riders were safely evacuated from the train, Feinberg said in a statement. Another train that was behind the derailed cab was stuck in a tunnel and crews were able to get the 125 passengers out safely, according to New York City Transit.

“We have 100 feet of the third rail with damage and we have significant damage to the car itself. In some of the photos, the crash actually struck the steel,” Frank Jezycki, the head of subways for NYC Transit, told reporters at a news conference.

WABC-TV reported that witnesses saw a homeless man throwing construction debris onto the tracks. The New York Police Department told ABC News that it was speaking with a person of interest, but as of Sunday afternoon, there were no arrests.

The derailment ruined subway service for thousands of customers for the rest of the day as the station had to be bypassed. Crews worked around the clock to restore power and service to normal.

Feinberg warned commuters to be ready for inconveniences as the workweek began.

“At this time, it is unclear whether express service will be available for the Monday morning rush,” she said in a statement.