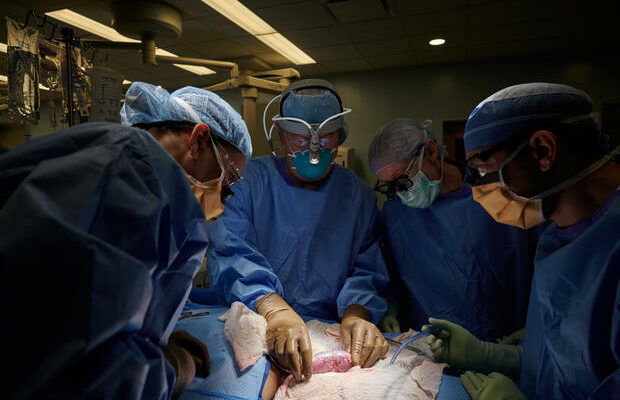 A pig’s kidney has been transplanted into a human and was not immediately rejected for the first time. The medical advancement, called a “transformative moment” by researchers, could pave the way to help the thousands of people in need of organ transplants every year.

On September 25, researchers at New York University performed the transplant, called xenotransplantation, in a two-hour procedure. The kidney, which was obtained from a genetically engineered pig, was placed in a brain dead human who had been placed on a ventilator with the consent of her family. The kidney was attached to the blood vessels in the donor’s upper leg and kept outside the abdomen, where it was covered with a protective shield, for the duration of the 54-hour study.

Researchers at NYU have connected a pig’s kidney to a human body that was being kept alive on a ventilator.

Researchers observed that the body was producing levels of urine and creatinine that were “normal and equivalent to what is seen from a human kidney transplant,” NYU said, and there were no signs of the body rejecting the organ.

Dr. Robert Montgomery, who led the surgical team, said in a statement that the procedure was a “transformative moment in organ transplantation.” He told Dr. Jon LaPook in a CBS Evening News exclusive interview that the procedure “was even better than I expected.”

“The kidney turned a beautiful pink color and immediately urine started pouring out of the ureter,” he said. “…There was complete silence for a few minutes while we were sort of taking in what we were looking at, which was incredible. It was a kidney that was immediately functioning.”

Chad Ezzell, chief clinical officer of LiveOnNY, a non-profit organization that facilitates organ and tissue donation in New York City, said in a statement that the research is “an incredible scientific achievement.”

“We are entering a new era for our field and this will give new hope to those on our wait list as this important research moves forward,” Ezzell said.

The idea of using animal organs for transplants is not new, Montgomery told LaPook, but historically, animal-to-human transplants have not been compatible.

“When you cross species with a transplant and it happens immediately, humans have preformed antibodies circulating in their blood that are directed towards most of them towards a single molecule that was lost during evolution from pig to man,” he said. “And so when you put an organ from a pig into a human, it’s immediately rejected.”

What allowed this transplant to work, Montgomery said, was genetically engineering the donor pig so that it didn’t have the enzyme that the human body is designed to immediately attack.

The results of the study have not yet been peer reviewed, but Montgomery said that this research could mean “that no one will need to die waiting for an organ anymore.”

According to the Organ Procurement and Transplantation Network, there are more than 90,000 people in the U.S. currently waiting for a liver transplant. These individuals make up the majority of the roughly 106,728 thousand waiting for an organ transplant.

But the number of organ donations is relatively small in comparison. From January to September this year, there were a total of 31,361 transplants across all organ categories, according to the network.

Montgomery told Dr. LaPook he thinks researchers could conduct their transplant in a living person “in the next year or two.”

“I think it will be something that, you know, eventually will be perfected to the point where it’ll be an alternative to a human organ,” Montgomery said. “…I have hope.”