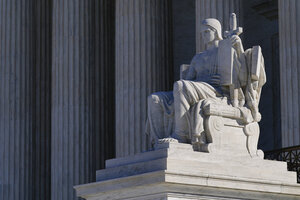 WASHINGTON (AP) — The Supreme Court has agreed to review a case involving a federal law that gives Native Americans preference in adoptions of Native children.

The high court said Monday it would take the case involving the 1978 Indian Child Welfare Act. The law has long been championed by Native American leaders as a means of preserving their families and culture.

The law gives Native American families priority in foster care and adoption proceedings involving Native children, and it places reporting and other requirements on states. A federal appeals court in April upheld the law and Congress’ authority to enact it. But the judges also found some of the law’s provisions unconstitutional, including preferences for placing Native American children with Native adoptive families and in Native foster homes.

The case won’t be argued until after the high court begins its new term in October.

Texas, Louisiana, Indiana and seven individuals had sued over provisions in the law, and a federal district court initially sided with the group and struck down much of the law. But in 2019, a three-judge federal appeals court panel voted 2-1 to reverse the district court and uphold the law. The full court then agreed to hear the case and struck some provisions.

The Biden administration asked the Supreme Court to review the case, arguing that the provisions should not have been struck.

Before the Indian Child Welfare Act was passed, between 25% and 35% of Native American children were being taken from their homes and placed with adoptive families, in foster care or in institutions. Most were placed with white families or in boarding schools in attempts to assimilate them.