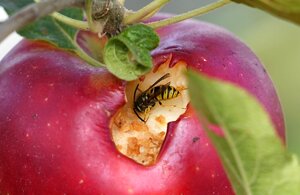 A wasp sits on an apple under solar panels, installed over an organic orchard in Gelsdorf, western Germany, Tuesday, Aug. 30, 2022. Solar installations on arable land are becoming increasingly popular in Europe and North America, as farmers seek to make the most of their land and establish a second source of revenue. (AP Photo/Martin Meissner)

But Nachtwey’s farm is also reaping a second harvest: Many of the apple trees grow beneath solar panels that have been producing bountiful electricity during this year’s unusually sun-rich summer, while providing the fruit below with much-needed shade.

“The idea is simple,” said Nachtwey, whose farm lies in Gelsdorf, an hour’s drive south of Cologne. “To protect the orchard, without reducing the available growing surface and in particular maintaining production. On top of that there’s the solar electricity being generated on the same land.”

Large-scale solar installations on arable land are becoming increasingly popular in Europe and North America, as farmers seek to make the most of their land and establish a second source of revenue.

Getting the right mix of crop and solar is hard though, because modern fruit varieties are finely tuned to particular growing conditions. Any change can tip the balance, costing farmers revenue if their fruit is damaged, the wrong color or not as sweet as consumers like.

That’s why Nachtwey is collaborating with researchers to test which apple varieties thrive under the solar canopy, and which types of photovoltaic roofs are best suited for the orchard. To compare the results, some trees are covered with a conventional netting normally used to protect sensitive crops from hail.

Juergen Zimmer, an expert with the agricultural services department of Rhineland-Palatinate state, said the apples grown under the solar roofs were slightly less sweet this year than those under the hail nets. But hardly any of the solar-shaded apples got damaged in the intense sunlight that hit the region on July 24 this year, whereas up to 18% of the uncovered fruit suffered sunburn that day, he said.

“We need at least two to three full years to record all the weather conditions that might occur, and look at the yield and color that the different varieties of tree produce,” said Zimmer.

Researchers hope the tests will show that tree fruit crops thrive under solar panels. This could help prevent renewable energy production from competing for precious land with agriculture — a growing concern for those seeking to tackle climate change and rising food prices.

Nachtwey said he could use the solar electricity generated on the farm to power his own facilities and machines. But to start with, he plans to provide the electricity to dozens of nearby homes instead.

Frank Jordans in Berlin contributed to this report.

Follow all AP stories about climate change issues at https://apnews.com/hub/climate-and-environment.