Teens charged with planning Columbine-style attack at their high school 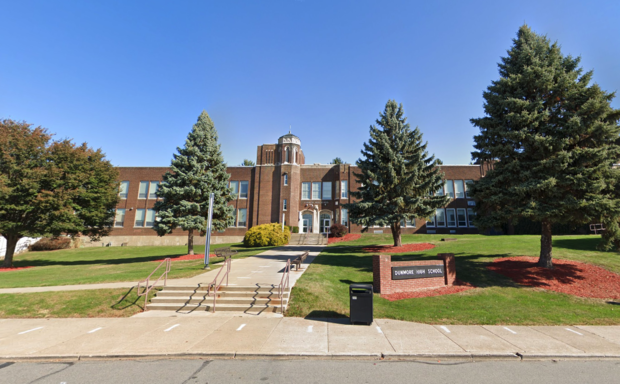 Two high school students in Pennsylvania have been accused of plotting a massacre at their high school on the 25th anniversary of the Columbine attack, according to charging documents obtained by CBS News on Monday. Alyssa Kucharski and Zavier Lewis, both 15, will be charged as adults due to the “serious nature of the charges,” and two other students have been charged as juveniles, the office said.

Charging documents allege the plot began when Kucharski started a group message on May 20, 2021. The group, which she called “natural born killers,” allegedly discussed plans for a mass shooting at Dunmore High School on April 20, 2024, the 25th anniversary of the mass shooting at Columbine High School that left 13 victims dead. Kucharski, Lewis, and at least two others also discussed plans to kill three specific school staff members, the documents allege.

“So y’all plan on shooting up the school,” one member said, according to the complaint. “I am down.”

Another called “dibs” on one school official, before allegedly writing, “I’m killing him.”

After law enforcement was alerted by a parent who found the group chat’s messages on their child’s phone, one of the juveniles told police that Kucharski had been making Molotov cocktails and homemade explosives out of gunpowder and CO2 cartridges, and said she had stockpiled 20-30 Molotov cocktails under the front porch of her home, the documents said.

When officials executed a search warrant at Kucharski’s home, they found parts used to make explosive devices, a Molotov cocktail and parts to make more, as well as notebooks with instructions for making a bomb, drawings of explosive devices and sections about Columbine, the documents said. Officials also found a digital camera that contained photos of Lewis and Kucharski preparing to manufacture explosives.

In one notebook filled with lists of types of guns and their prices, the complaint said, there was also a diary entry that appeared to reference Dylan Klebold and Eric Harris, the perpetrators of the Columbine massacre: “I think I’m gonna go with a Klebold setup. A tec-9 and a sawed-off shotgun. But instead of a double barrel, I want one like eric shot.”

When interviewed on September 16, Kucharski told police, “I don’t know why I did it, I just did it because that was on my mind at the time,” according to the complaint. She allegedly said she planned to use the bombs and then guns to carry out the attack, and that she hoped to cause more casualties than Columbine.

She said the plan had stopped about a month ago when she and her friends stopped discussing it, and that she hadn’t made a bomb in a month, the complaint said.

When Lewis was interviewed the same day he said he joined “natural born killers” to help convince Kucharski not to go through with the plan. He allegedly said he wasn’t sure if he would have been able to go through with the plan, but that for Kucharski, it was “definitely going to happen.” He also claimed Kucharski stopped planning for the attack once she learned the group was under investigation.

Both Lewis and Kucharski are charged with unlawful possession or manufacture of weapons of mass destruction, terroristic threats with intent to terrorize, aggravated assault, possession of explosive material, and engaging criminal conspiracy.

Kucharski is also charged with risking catastrophe. The charges for the two juveniles have not been publicly released.

In a statement announcing the charges, Lackawanna County District Attorney Mark Powell said he does not believe there is currently an active threat to the school. “We are relieved that this plot was uncovered before anyone was hurt and urge anyone who has information about potential threats of school violence to contact police immediately,” Powell said.