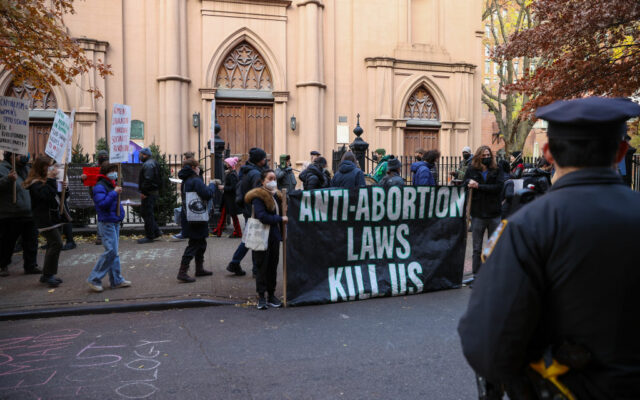 By Eleanor Klibanoff, The Texas Tribune

With the 5th U.S. Circuit Court of Appeals set to hear arguments about Texas’ restrictive new abortion law Friday, abortion providers have asked the U.S. Supreme Court to again intervene and instead send the case to a lower court.

Abortion providers filed the request Monday, along with a motion to expedite the high court’s ruling on the matter ahead of Friday’s hearing. Lawyers for the providers argue that the 5th Circuit should send the case to district court, which in October temporarily blocked enforcement of the law.

At the heart of this case is Texas’ novel legislation that empowers private citizens to file lawsuits against anyone who “aids or abets” in an abortion after about six weeks of pregnancy. Passed as Senate Bill 8, the law bans abortions after an ultrasound can detect an embryo’s early cardiac activity, which often occurs before people know they are pregnant. But it bars Texas officials and law enforcement from enforcing the statute. Instead, SB 8 allows private citizens to sue those who help others get an abortion after around six weeks of pregnancy, and if the lawsuit is successful, plaintiffs get at least $10,000 in damages.

The law is designed to evade judicial review and has been successful on that front: Women have largely been unable to obtain constitutionally protected abortions in Texas since Sept. 1.

In December, the Supreme Court threw out most of the providers’ challenges to the law and allowed only one narrow challenge, against medical licensing officials, to proceed. The court also allowed the restrictions on the procedure to remain in place.

Then, in an additional blow to abortion providers, the Supreme Court sent that one remaining challenge to be reargued before the 5th Circuit, considered one of the most politically conservative circuit courts in the nation. Providers had been expecting it to be sent to the district court, which was seen as a more favorable venue. They argued in Monday’s filing that district court is the proper venue for the case to proceed.

“It’s unconscionable that the Fifth Circuit Court of Appeals is defying the Supreme Court’s ruling last month by refusing to send our case back to the district court so that we can continue fighting Texas’ six-week abortion ban,” Brigitte Amiri, deputy director of the ACLU Reproductive Freedom Project, said in a statement. “The Supreme Court must step in to prevent the appeals court from needlessly delaying our lawsuit against Texas’ bounty-hunting scheme and compounding the harm this ban has already inflicted on Texans.”

Rather than remanding the case to the district court, though, the 5th Circuit decided in a split decision to hear arguments in the case on Friday and will consider whether the case should be sent to the Texas Supreme Court to proceed. Legal experts say certifying a case to the state supreme court can extend the appeals process by months, if not years.

Circuit Judge Stephen A. Higginson dissented from the majority, arguing that the Supreme Court’s ruling does not require reargument before the 5th Circuit and should not be sent to the Texas Supreme Court. Higginson also wrote that he believes the Supreme Court ruling indicates that the medical licensing officials should be blocked from enforcing the law.

But Higginson noted that he had been “unpersuasive,” and unless the Supreme Court weighs in before Friday, the case is likely to proceed at the 5th Circuit. Abortion providers argue that this delay is harming women seeking abortions.

“For more than four months, Texans have been forced to carry unwanted pregnancies to term or flee the state to access constitutionally protected care,” Julie Murray, senior staff attorney with the Planned Parenthood Federation of America, said in a statement. “The Fifth Circuit has effectively shrugged in the face of this chaos, and the continued delay is completely unacceptable.”

Disclosure: Planned Parenthood has been a financial supporter of The Texas Tribune, a nonprofit, nonpartisan news organization that is funded in part by donations from members, foundations and corporate sponsors. Financial supporters play no role in the Tribune’s journalism. Find a complete list of them here.

This article originally appeared in The Texas Tribune at https://www.texastribune.org/2022/01/03/texas-abortion-law-court-challenge/.