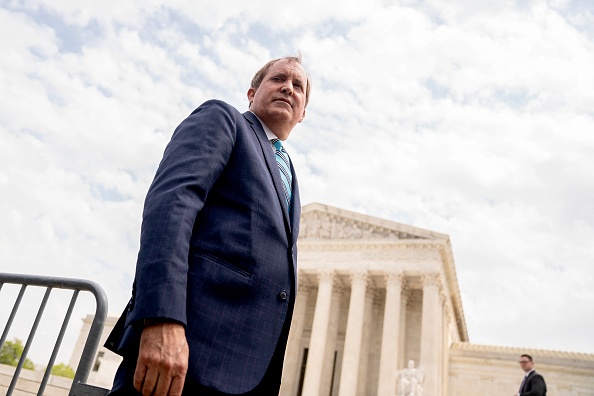 Texas Attorney General Ken Paxton speaks to reporters in front of the US Supreme Court in Washington, DC, on April 26, 2022. - The Supreme Court will hear oral arguments Tuesday in the Biden v. Texas case, which will determine if the Biden administration must continue to enforce a Trump-era program known as the remain in Mexico policy. The court is considering whether President Joe Biden can end a controversial Trump-era border policy that denies asylum-seekers entry to the US while their case is reviewed. (Photo by Stefani Reynolds / AFP) (Photo by STEFANI REYNOLDS/AFP via Getty Images)

SAN ANTONIO (KTSA News) — The U.S. Securities and Exchange Commission is pushing what numerous Attorneys General are calling unconstitutional requirements on investment advisors and companies that fall in the environmental, social, and corporate governance arena.

Texas AG Ken Paxton and 20 of his colleagues around the nation are sending a comment letter to the SEC condemning the idea that ESG-related companies have to disclose the greenhouse emissions of their portfolios. The letter accuses the SEC of making a thinly-veiled attempt to target certain industries, and it says this dynamic violates the First Amendment and the SEC’s materiality requirement. The letter also claims the Proposed Rule threatens to limit investment in the vital energy sectors that the American people depend upon.

The letter spotlights how the proposed rule goes far beyond the scope of the SEC’s pro-consumer regulatory authority and instead allows it to push a radical social agenda.

“Federal securities laws are a vital protection for investors across America,” the letter reads. “But now, the SEC has become more and more aggressive in implementing a political agenda untethered from its statutory mission. Beyond the legal problems in the Proposed Rule, the Proposed Rule worryingly ignores the interests of everyday Americans. We urge you to step away from imposing burdensome new requirements that only make investing more expensive. The Proposed Rule must not be finalized.”

This letter follows another one written to the SEC by Paxton in June, one in which 11 other Attorneys General also signed.

You can read Paxton’s letter from June by clicking here, and the current West Virginia-led letter from August can be seen here.