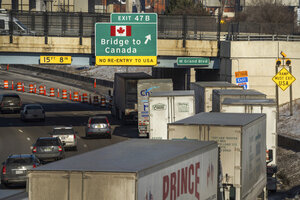 The money was being collected to provide financial support for truck drivers participating in the “Freedom Convoy” in Ottawa and the border community of Windsor.

The crowd sourcing website claims they have canceled the effort over what they claim are police reports of violence and illegal activity among the protesters.

They released the following statement:

“GoFundMe supports peaceful protests and we believe that was the intention of the Freedom Convoy 2022 fundraiser when it was first created.

We now have evidence from law enforcement that the previously peaceful demonstration has become an occupation, with police reports of violence and other unlawful activity.

To ensure GoFundMe remains a trusted platform, we work with local authorities to ensure we have a detailed, factual understanding of events taking place on the ground. Following a review of relevant facts and multiple discussions with local law enforcement and city officials, this fundraiser is now in violation of our Terms of Service (Term 8, which prohibits the promotion of violence and harassment) and has been removed from the platform.

Organizers provided a clear distribution plan for the initial $1M that was released earlier this week and confirmed funds would be used only for participants who traveled to Ottawa to participate in a peaceful protest. Given how this situation has evolved, no further funds will be directly distributed to the Freedom Convoy organizers — we will work with organizers to send all remaining funds to credible and established charities verified by GoFundMe.”

The fund raising effort raised about 10 million dollars before it was stopped. GoFundMe says donors will get a refund, if they request one.

Initially, the plans for the money not refunded is that it would be donated to various charities but the company changed course and will automatically return donations.

That’s not stopping the Attorney’s General in four states from launching an investigation.

“GoFundMe’s response to an anti-mandate, pro-liberty movement should ring alarm bells to anyone using the donation platform and, more broadly, any American wanting to protect their constitutional rights,” Attorney General Paxton said. “Many Texans donated to this worthy cause. I am acting to protect Texas consumers so that they know where their hard-earned money is going, rather than allowing GoFundMe to divert money to another cause without the consent of Texas citizens. I will get to the bottom of this deceitful action.”

Missouri, Florida and West Virginia are the other states launching investigations into why the fundraiser was canceled.