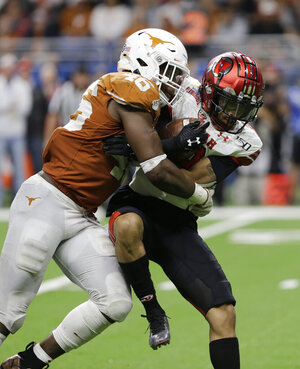 FILE - Texas linebacker Joseph Ossai (46) hits Utah wide receiver Derrick Vickers (8) during the second half of the Alamo Bowl NCAA college football game in San Antonio, Tuesday, Dec. 31, 2019. Ossai should have a big season in a new position. A linebacker in Texas' old 3-4 scheme, Ossai led Texas in tackles, then switched to a rush end position in the Alamo Bowl and delivered three sacks in a dominant win over Utah.(AP Photo/Austin Gay, File)

AUSTIN, Texas (AP) — The economic blow of the coronavirus pandemic is hitting the biggest, richest schools of college sports, whether they are planning to play football this fall or not.

Michigan and Texas both announced financial cuts and dozens of layoffs in their respective athletic departments on Tuesday. Both programs rank are among the biggest, wealthiest brands in college athletics. Michigan is not playing football this fall; Texas is.

At Michigan, which is a member of the Big Ten, athletic director Warde Manuel said the school is faced with the potential revenue loss of $100 million and will cut 21 positions. Those come after the school previously imposed a hiring freeze, salary reductions and team expense cuts. The school may also consider more furloughs and staff reductions in the future, Manuel said.

“The decision to implement staffing reductions was not made lightly and is difficult because of the deep impact on all aspects of our department and especially those who are directly affected,” Manuel said.

At Texas, the Longhorns are expecting to play the football season in the Big 12, and the first game is scheduled for Sept 12 at home against UTEP. Even so, athletic director Chris Del Conte announced 35 layoffs and salary reductions for more than 270 people throughout the program that will save about $13 million.

Del Conte said 26 coaches and administrators had volunteered to take pay cuts this year. Texas puts it head coaches and top assistants under guaranteed contracts. Football coach Tom Herman was set to be paid $6.2 million this year and just last week new basketball coach Vic Schaefer’s $13.8 million, seven-year deal was approved. For Herman, a 15% reduction would be more than $900,000

Del Conte did not immediately respond to a message seeking comment and wasn’t immediately clear if he was among the administrators who volunteered to cut his salary. His message said previous cost-cutting measures had helped save about $40 million but his message announcing the layoffs didn’t indicate how large a fiscal deficit the school still faces.

“The actions taken on Tuesday are heartbreaking, but necessary to put Texas athletics in a position for success moving forward,” Del Conte said. “These are unprecedented times we are in and all of us in college athletics are facing unexpected circumstances, a lot of change and very difficult decisions.”

Neither Michigan or Texas have announced cutting any sports programs. Stanford earlier this year announced plans to cut 11 sports. Iowa announced it will cut men’s gymnastics, men’s tennis and men’s and women’s swimming and diving after the 2020-2021 academic year as it projected a revenue deficit of up to $75 million.

More about:
University of Texas at Austin