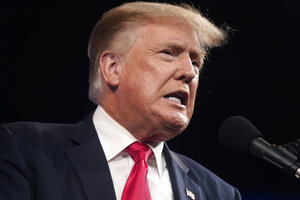 Trump has claimed the 2020 election was stolen and supported audits in other states.

The Texas Secretary of State’s Office did not say what prompted the announcement.

Earlier this year, Keith Ingram, the office’s elections administrator, said the 2020 elections in Texas were “safe and secure.”

Trump won Texas last year by 5.5 percentage points, the closest margin of victory by a GOP presidential nominee in decades.