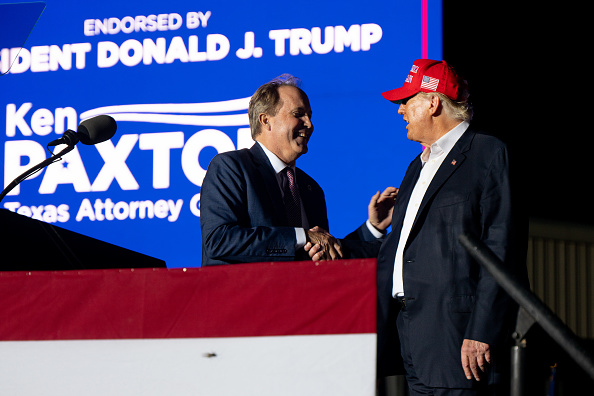 ROBSTOWN, TEXAS - OCTOBER 22: (L-R) Texas Attorney General Ken Paxton greets former U.S. President Donald Trump at the 'Save America' rally on October 22, 2022 in Robstown, Texas. The former president, alongside other Republican nominees and leaders held a rally where they energized supporters and voters ahead of the midterm election. (Photo by Brandon Bell/Getty Images)

SAN ANTONIO (KTSA News) — Former President Donald Trump is announcing numerous endorsements in his bid for the White House in 2024, and one of them is Texas Attorney General Ken Paxton.

The announcement was made in a Tweet on Wednesday.

Donald J. Trump’s efforts to secure our borders, project strength across the globe, expand economic opportunity, & protect our freedoms put our nation back on track. I am proud to endorse his campaign for President so that he can once again put America First & heal our nation. pic.twitter.com/eZwrwHhcS1