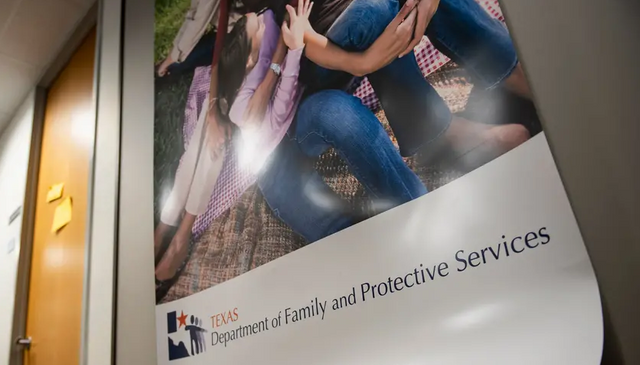 The Texas Department of Family and Protective Services has fired an employee for proposing sex work to a 14-year-old in the state’s care. (Eddie Gaspar/The Texas Tribune)

By Sneha Dey, The Texas Tribune

A state agency responsible for investigating abuse and exploitation of children has fired an employee for encouraging a 14-year-old in the state’s care to do sex work, a spokesperson with the Texas Department of Family and Protective Services said Sunday.

The child in the state’s foster care system was being housed at a Harris County hotel while awaiting placement. She was asking for food when the staff member proposed sex work. The child recorded the interaction in a video obtained by Fox 26.

“The person in the video – who was employed as [child protective services] support staff — was dismissed from her position August 10,” Marissa Gonzales, the DFPS spokesperson, said in a statement. “The safety and appropriateness with which children in care must be treated is our paramount concern. Nothing less will be tolerated.”

Gonzales told The Texas Tribune that all employees are trained before supervising youth. DFPS Commissioner Jaime Masters has apologized to the child and her mother.

“My daughter told me that the worker had been telling her to do these things, so she said she decided to video her,” Keisha Bazley, the mother of the child, told Fox 26. Bazley had filed a formal complaint with the department.

The identity of the dismissed CPS employee has not been made public.

This is only the latest controversy to befall the state’s child welfare department, which has been under years of scrutiny for its inadequate care of some of the state’s most vulnerable children.

A federal judge has repeatedly slammed the state for failing to properly punish or shut down unsafe child care placement facilities. U.S. District Judge Janis Jack has also criticized the state for its inadequate background checks of caregivers, according to the San Antonio Express-News.

A quarter of children who DFPS identified as victims of sexual abuse were victimized or revictimized after entering foster care, according to court-appointed watchdogs.

Texas ordered a state-contracted shelter to close in March after a court revealed that staff members were trafficking the children in their care. Nine staff members are accused of subjecting seven children to sexual and physical abuse, neglectful supervision and medical neglect. One caretaker accused of selling nude photos of two teenage victims of sexual abuse at the shelter was previously fired from a nearby state juvenile facility for having inappropriate relationships with children in her care, state records show.