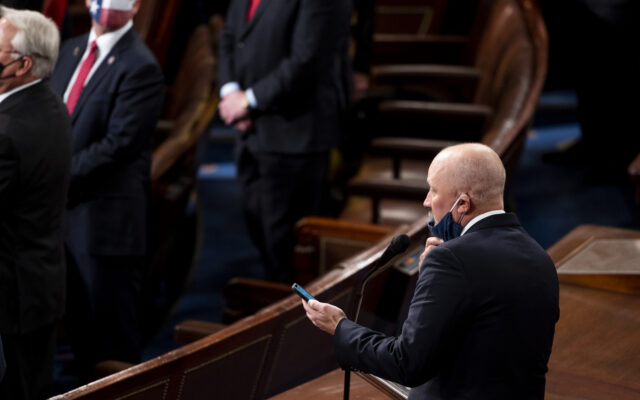 WASHINGTON, DC - JANUARY 3: Rep. Chip Roy (R-TX) challenges the seating of lawmakers from Arizona, Georgia, Michigan, Nevada, Pennsylvania and Wisconsin on the House floor in the Capitol on the first day of the 117th Congress on January 3, 2021 in Washington, DC. Both chambers are holding rare Sunday sessions to open the new Congress on January 3 as the Constitution requires. (Photo By Bill Clark - Pool/Getty Images)

SAN ANTONIO (KTSA News) -A Republican Congressman from Texas says President Trump “better damn well do his job and make sure the American people know to back away from the Capitol.”

Rep. Chip Roy of Hays County says the President should work with law enforcement to secure the building so that Congress can resume the job of counting the Electoral College votes.

Roy told KTSA News he was in the U.S. House when Trump supporters breached the Capitol. Some of them started banging on the doors of the House chamber.

“The banging occurred about halfway through our debate on the Arizona objection.  We proceeded off the floor of the House of Representatives and to another location,” said Roy.

The Congressman said protesters have a right to peacefully assemble, but what they did at the Capitol Wednesday was illegal.  Video shows the protesters breaking glass windows.  Photos on social media show one protester sitting in Nancy Pelosi’s office and others in the Senate Chamber.

“They broke in here and they should be prosecuted to the fullest extent of the law.  They should go to jail.  Anybody who harmed anyone should get full prosecution,” Roy said.

Roy was waiting for law enforcement to secure the Capitol so that he and his colleagues could get back to work.  He told KTSA News he would not be deterred “by the mob.”

“We’re going to do our job and that’s the end of the story,” Roy said.

He acknowledged that many people who voted for him are unhappy that he was planning to vote to certify the Electoral College votes.

He believes Congress also has a duty to figure out how to work together despite their disagreements.

“Federalism is our way to unite the country so that we’re not telling each other how to live,” said Roy.  “That’s the only path forward for our country to unite.  Otherwise, we’re going to be having more and more dissention as we saw last summer and now, we’re seeing today.”