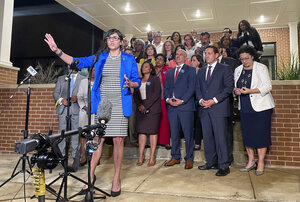 FILE - In this May 31, 2021, file photo, Texas state Rep. Jessica Gonzalez speaks during a news conference in Austin, Texas, after House Democrats pulled off a dramatic, last-ditch walkout and blocked one of the most restrictive voting bills in the U.S. from passing before a midnight deadline. Democrats in the Texas Legislature were planning Monday, July 12, to leave the state in another revolt against a GOP overhaul of election laws. (AP Photo/Acacia Coronado, File)

AUSTIN, Texas (AP) — Democrats in the Texas Legislature on Monday bolted for Washington, D.C., and said they were ready to remain there for weeks in a second revolt against a GOP overhaul of election laws, forcing a dramatic new showdown over voting rights in America.

Private planes carrying a large group of Democrats took off from an airport in Austin, skipping town just days before the Texas House of Representatives was expected to take up sweeping new voting restrictions in a special legislative session ordered by Republican Gov. Greg Abbott.

It was not immediately clear how many of the 67 Democrats in the Texas House planned to go, but party leaders said it was enough to bring the Legislature to a halt.

“This is a now-or-never for our democracy. We are holding the line in Texas,” said Democratic state Rep. Trey Martinez Fischer. “We’ve left our jobs, we’ve left our families, we’ve left our homes. Because there is nothing more important than voting rights in America.”

The decision to hole up in Washington is aimed at ratcheting up pressure in the nation’s capital on President Joe Biden and Congress to act on voting at the federal level. Biden is set to deliver a major address on the issue Tuesday in Philadelphia, after facing growing criticism for taking what some on the left call too passive a role in the fight.

It marks the first time since 2003 that Texas Democrats, shut out of power in the state Capitol for decades, have crossed state lines to break quorum.

Moments after Democrats jetted off, Abbott issued a statement blasting them for leaving, while Republican House Speaker Dade Phelan promised to use “every available resource” to secure a quorum. He did not elaborate, but some House Republicans signaled they would take action when the chamber reconvenes Tuesday.

When Democrats fled the state two decades ago — in a failed attempt to stop new GOP-drawn voting maps — state troopers were deployed to bring them back.

“Texas Democrats’ decision to break a quorum of the Texas Legislature and abandon the Texas State Capitol inflicts harm on the very Texans who elected them to serve,” Abbott’s statement said. “As they fly across the country on cushy private planes, they leave undone issues that can help their districts and our state.”

He went on to list property tax relief, along with funding for law enforcement, foster care children and retired teachers — making no mention of new election laws.

The drastic move lays bare how Democrats are making America’s biggest red state their last stand against the GOP’s rush to enact new voting restrictions in response to former President Donald Trump’s false claims that the 2020 election was stolen. More than a dozen states this year have already passed tougher election laws — but only in Texas have Democrats put up this kind of fight.

The agenda is widely opposed by Democrats. A first key vote on the new voting measures had been expected this week, hastening their scramble to leave town.

The move carries risks and no guarantee of victory in the long run.

Abbott, who is up for reelection in 2022 and has demanded new election laws in Texas, could keep calling 30-day special sessions until a bill is passed. He also punished Democrats after their May walkout by vetoing paychecks for roughly 2,000 Capitol employees, which will begin taking effect in September unless the Legislature is in session to restore the funding.

Staying away for an extended time could also carry repercussions in next year’s midterm elections, although many Texas Democrats are already expecting a difficult cycle in 2022, particularly with Republicans set to begin drawing new voting maps this fall that could cement their majorities.

For weeks, Democrats have signaled they were ready to draw a line. Adding to their anger: A Houston man who gained attention last year after waiting more than six hours to cast a ballot was arrested on illegal voting charges one day before the special session began Thursday. Attorneys for Hervis Rogers say the 62-year-old did not know that his being on parole for a felony burglary conviction meant he wasn’t allowed to vote.

State Sen. Bryan Hughes, the author of both GOP attempts to pass election changes in Texas, has defended the new version, which leaves out contentious attempts to ban Sunday morning early voting and make it easier for judges to overturn an election.

“Your ballot is sacrosanct,” Hughes said Saturday. “Everything else in the election process should be bathed in sunshine.”

Biden and his team are stressing ongoing legal efforts to safeguard voting rights. They’ve also promised a major legislative push after Senate Republicans blocked a sweeping election overhaul last month. The president has told reporters he plans on “speaking extensively” on voting rights and that he would be “going on the road on this issue.”