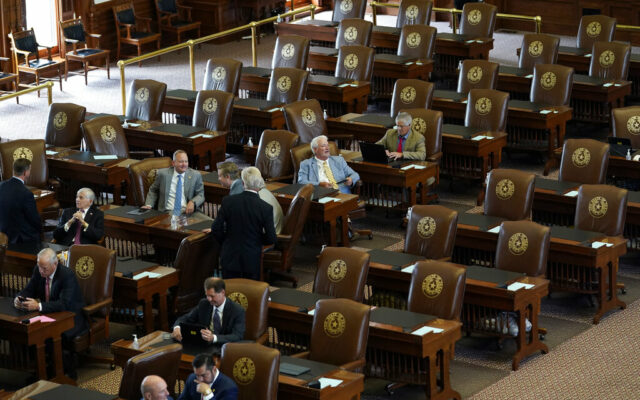 In this July 13, 2021, file photo empty seats are seen in the House Chamber at the Texas Capitol in Austin, Texas. Texas Democrats left the state to block sweeping new election laws, while Republican Gov. Greg Abbott threatened them with arrest the moment they return. (AP Photo/Eric Gay, File)

SAN ANTONIO (KTSA News) — Texas House Democrats have plans to continue speaking to federal lawmakers more than a week in Washington D.C. in an effort to block voting on election security and voting laws in Texas.

Democrats said they met with House Majority Whip Jim Clyburn to discuss the voting legislation in Texas and are being encouraged to “continue using our voices on Capitol Hill.”

“We have to continue to urge the Senate to act,” Texas House Democratic Caucus Chairman Chris Turner said noting that federal lawmakers are pushing to pass the For The People Act.

The For the People Act addresses voter access, election integrity and security, political spending and ethics in all three branches of the federal government.

“I think there is a real interest and real desire to start moving forward on the preclearance provision to restore the Voting Rights Act,” Turner said.

The preclearance provision of the Voting Rights Act of 1965 prohibits certain jurisdictions from implementing change that affects voting without receiving preapproval from the U.S. Attorney General or D.C. U.S. District Court stating the change does not discriminate against protected minorities.

Turner said the provision was gutted by the 2013 Supreme Court decision in Shelby County v. Holder. The decision rendered the provision unconstitutional over the fact that 40-year-old data was used to create a formula to determine which jurisdictions fell under the purview of the preclearance provision.

This provision, Turner said, “is how we can block repressive voting laws in Texas.”

Speakers at today’s press conference included Barbara Gervin-Hawkins from San Antonio who represents the east and northeast side of town.

“We’re never going quit lifting the voices of our constituents — Countless Texans who have fought so hard for the sacred right to vote. We cannot let them down.” Gervin-Hawkins said. “This is not a partisan issue, it’s a one person-one vote issue.”

In the week since Democrats left the state, Texas House Republicans have met with retired teachers and children in Foster Care to discuss items from the special session agenda that do not relate to the voting and election bills.

Abbott identified 11 total action items to be tackled during the special session that began July 8.

Members from the Democratic caucus called out Texas Governor Greg Abbott for failing to call special sessions related to the pandemic and said Democrats have been ready to pass 13th check legislation “for five sessions.”

Republicans said last week the 13th check legislation was left on the table because of budget issues during the regular session, but the state is in a better position to pass the legislation now.

In the face of questions related to the six Texas House Democrats testing positive for COVID-19 over the last few days, Turner made comments about Texas’ low vaccination rate and the rise in coronavirus cases and hospitalizations seen across the state in addition to nationally and worldwide.

“It is clear when you look at what is happening with Major League Baseball and the Olympics that right now we’re seeing breakthrough cases in the vaccine population, in a wide array of professions and parts of the world,” Turner said.

At least 51 Democratic representatives from the Texas House flew out of Austin last Monday to break quorum to alay a vote on Senate Bill 1 and House Bill 3.

The contentious bills in Texas would eliminate drive-thru and 24-hour early voting seen in Harris County in 2020, add ID requirements for voting by mail, monthly citizen checks, enhancing partisan poll watcher protections, and a ban on the distribution of mail-in ballot applications in addition to making it a state jail felony to prohibit local election officials from sending out unsolicited applications.

“We all stand ready to help if our Governor and our Republican colleagues in the legislature want to put politics aside,” Gervin-Hawkins said. “Pass the 13th check for our teachers, expand Medicaid, fix the grid, save our children in Foster Care. Those are the real priorities of Texans.”

Texas Governor Greg Abbott said last week that Texas Democrats will be arrested and “cabined inside the Texas Capitol until they get their job done” as soon as they return to the state. He also said he will call “special session after special session” until the 2022 elections to work through the agenda items set for the current special session.