Texas GOP voting changes on cusp of going to governor 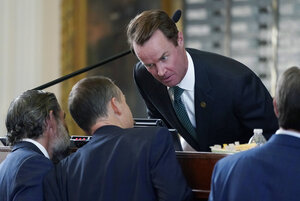 AUSTIN, Texas (AP) — Texas Republican lawmakers prepared Tuesday to send Gov. Greg Abbott their rewrite of the state’s election laws, with the House approving the package after the last-minute removal of a bipartisan provision to avoid prosecuting voters with felony convictions who were unaware they couldn’t cast a ballot.

The rebuffed proposal followed backlash to the illegal voting arrests of two Texans who said they did not realize the law prohibits people on parole, probation or supervised released from voting. Both voters are Black, which intensified criticism amid a broader fight over voting restrictions that opponents say disproportionately impact people of color.

New language would have sought to add clarity that a person must have known he or she was voting illegally in order to face prosecution. Although the GOP-controlled House approved the provision, it was rejected by Senate negotiators just as the bill was being finalized.

Lawmakers specifically invoked the case of Crystal Mason, who was sentenced to five years in prison in 2018 for casting a provisional ballot in the 2016 presidential election when she was on probation. Her provisional vote wound up not counting, and her case is now on appeal.

“I hope this body will continue working to correct the injustice by which an inherently benign, even a civil act, the act of voting, becomes the basis for the deprivation of a person’s liberty,” Democratic state Rep. John Turner said.

After the full voting bill cleared, the House approved a resolution that “a person should not be criminally incarcerated for making an innocent mistake.” It passed 119-4.

The full bill must now get final approval in the Senate before going to Abbott, who has said he will sign the measure and could do so in the coming days.

No other last-minute changes were made to a sweeping GOP elections bill that Texas Democrats this summer turned into the most protracted fight in the U.S. over new voting restrictions. Nationwide, Republicans have rushed to impose tighter elections laws driven by President Donald Trump’s false claims that the 2020 election was stolen.

Democrats twice walked out of the state Capitol to temporarily bock the bill, including a 38-day holdout in one of the longest quorum breaks in Texas history. Not all of the more than 50 Democrats who fled to Washington, D.C., in July have agreed to return, and those continuing to hold out have said they felt betrayed by their colleagues.

The bill would limit how and when voters can cast a ballot in booming and fast-changing Texas, where decades of commanding Republican victories on Election Day are starting to shrink. Many of the most hotly contested changes would eliminate expanded voting access that Texas’ largest county put in place during the COVID-19 pandemic.

Harris County, which includes Houston and is a major source of Democratic votes, offered 24-hour polling places, drive-thru voting and tried sending mail-ballot applications to 2 million registered voters last year. All of that would now be outlawed under the bill heading to Abbott.

Republicans say criticism of the bill’s impacts are exaggerated and emphasize it would add an extra hour of early voting daily, as well as expand the number of counties that must offer 12 hours of early voting on weekdays.

Mason’s illegal voting arrest is not the only one to draw criticism from Democrats and voting rights groups. In July, Hervis Rogers was arrested on charges of illegal voting because he cast a ballot while still on parole after waiting more than six hours in line during the 2020 presidential primary.

The cases drew national attention and angered critics who saw both as overzealous attempts by Republicans to look tough on rare cases of improper voting. The Brennan Center for Justice in 2017 ranked the risk of ballot fraud at 0.00004% to 0.0009%, based on studies of past elections.

Republican state Rep. Briscoe Cain, who had carried the sweeping voting bill in the House earlier this year, said he supported the amendment to clarify the voting rules for those with felony convictions to ensure that “people that do innocent things” are not harmed for past mistakes.