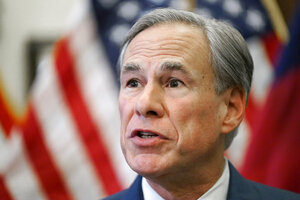 At the signing for a GOP-supported voting bill on Tuesday, a reporter asked Abbott why he would “force” a rape or incest victim to carry a pregnancy stemming from sexual assault to term. The new abortion bill, which went into effect last week, outlaws abortion when a fetal heartbeat is detected — as early as 6 weeks into pregnancy and well before many women even know they are pregnant.

The governor responded that the bill “doesn’t require that at all because, obviously, it provides at least 6 weeks for a person to be able to get an abortion.”

He also emphasized that “rape is a crime and Texas will work tirelessly that we eliminate all rapists from the streets of Texas by aggressively going out and arresting them and prosecuting them and getting them off the streets.”

The Texas Department of Public Safety reported that in 2019, there were more than 14,650 cases of rape in the state, making up nearly a quarter of all reported violent crimes. That same year, fewer than 3,900 people were arrested for rape and other sex offenses, according to the department.

The bill also allows civilians to sue anyone who gets, helps someone get, or performs and abortion for up to $10,000. However, victims of rape, sexual assault or incest are not liable to be sued, according to the bill.

“I’m sorry that we have to break down biology 101 on national television, but in case no one has informed him before in his life, 6 weeks pregnant means 2 weeks late for your period,” she said. “And 2 weeks late for your period for any person with a menstrual cycle, can happen if you’re stressed, if your diet changes, or for really no reason at all. So you don’t have 6 weeks.”

In regards to Abbott’s comments about seeking to “eliminate all rapists,” Ocasio-Cortez said that most rape victims are assaulted by people who they know. When it happens, it can take victims a long time to come forward, and when they do, not everyone wants to “retraumatize themselves by going to court.”

“This idea that we’re going to ‘end rape,’ when the same type of, frankly, rape culture and the same type of misogynistic culture that informed this abortion law to begin with…it’s awful,” she said. “…We know that anti-choice bills are not about being pro-life. Because if they were about being pro-life, then the Republican party would support, frankly, an agenda that helps guarantee health care, that helps ensure that people who do give birth that don’t have the resources to care for a child, can have that care for a child.”

“None of this is about supporting life. What this is about is controlling women’s bodies and controlling people who are not cisgender men,” Ocasio-Cortez continued. “He speaks from such a place of deep ignorance, and it’s not just ignorance. It’s ignorance that is hurting people across this country.”

Many shared Ocasio-Cortez’s sentiments, saying on Twitter that Abbott’s comments are “an insulting lie.”

The new bill has been criticized for banning nearly all abortions in the state. After the Supreme Court failed to halt the abortion bill last week, Justice Sonia Sotomayor wrote a scathing dissent, saying that the law, which is the strictest in the country, bans abortions “months before fetal viability.”

“The Act is a breathtaking act of defiance — of the Constitution, of this Court’s precedents, and of the rights of women seeking abortions throughout Texas,” she said. “The Court should not be so content to ignore its constitutional obligations to protect not only the rights of women, but also the sanctity of its precedents and of the rule of law.”