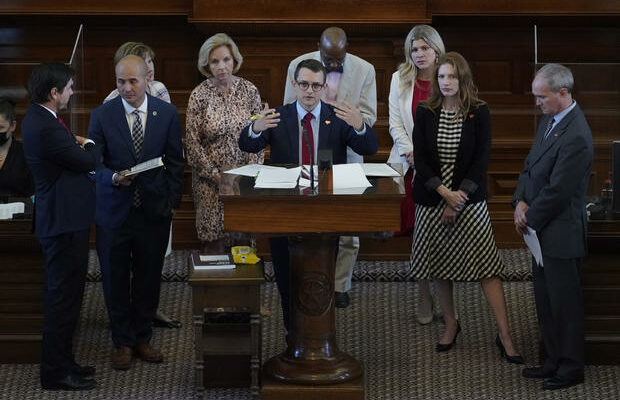 Representative Briscoe Cain, R-Houston, center, stands with co-sponsors as he answers questions and speaks in favor an election bill in the House Chamber at the Texas Capitol in Austin on May 6, 2021. Eric Gay / AP
▶ Watch Video: Republican lawmakers in Florida and Texas look to change state voting laws
Republicans in the Texas House of Representatives moved a big step closer early Friday to making Texas the latest GOP-controlled state to pass sweeping election law changes. The lawmakers advanced a major bill that underwent significant revisions in a late-night session and was finally approved shortly after 3 a.m. central time.

Debate on the bill began around 6:00 p.m. central time, but just a couple of hours later, Democrats filed a procedural challenge that halted debate for hours. During that time, lawmakers hashed out amendments to address some of the concerns Democrats and voting rights organizations had raised.

On Thursday, demonstrators at the statehouse in Austin decried the proposed changes.

The revisions lowered many of the initial criminal penalties imposed for voting errors. There are fewer penalties for people assisting voters or election judges who make mistakes doing their jobs. People assisting voters still need to sign a document under penalty of perjury that says, in part, “I did not pressure, encourage, coerce, or intimidate the voter into choosing me to provide assistance.”

Lawmakers also added more checks on partisan poll watchers than the bill had when debate started. It makes it clear watchers can “observe without obstructing.” Amendments were added to allow judges to call law enforcement if a poll watcher “commits a breach of the peace or violation of this code,” and prohibits watchers from taking pictures of private information or ballots. Watchers who believe they had their performance “unlawfully obstructed” can seek relief in court.

The bill also bans early voting clerks from sending unsolicited mail ballot requests to voters. Texas has strict rules about who is allowed to vote-by-mail: a voter must be 65 years or older, disabled, out of the county on Election Day and early voting period or in jail but otherwise eligible. An amendment was added to require an online tracking system for mail ballots.

The bill, SB 7, will need one more vote in the state House before it goes back to the Senate. Republicans there could vote on the version passed by the House or the chambers will have to sort out their differences in conference before a final bill can land on Governor Greg Abbott’s desk.

Abbott on Thursday tweeted his support for election reform efforts, saying “I made election integrity an emergency item this session to help ensure every eligible voter gets to vote & only eligible ballots are counted.”

The changes in the House followed hours of debate in which Democrats challenged Republican Representative Briscoe Cain, the chair of the House Elections Committee, over provisions in the bill. They suggested the reforms he was recommending weren’t necessary and would impact  minority, older and disabled voters. An official with the Texas secretary of state’s office who told the committee in March, “the elections in Texas last year were a success.”

While Cain ultimately agreed to some of the amendments put forth by Democrats, he earlier defended his bill by saying its purpose was to “protect every single voter in Texas.”

“I filed this bill to ensure that we have an equal and uniform application of our election code and to protect people from being taken advantage of,” Cain said. “We don’t need to wait for bad things to happen in order to try and protect and secure these elections.”

When asked which potential voter fraud the bill was trying to stop, Cain pointed to ballot harvesting. SB 7 makes “paid vote harvesting” a criminal offense. That includes offering a benefit for “vote harvesting services,” which the bill defines as interacting with voters in connection with a ballot “intended to deliver votes for a specific candidate or measure.”

Earlier this week, major corporations including American Airlines, HP and Microsoft signed a letter expressing concerns about proposed changes to voting laws in Texas. The letter was released by Fair Elections Texas, which was recently formed by Dallas Mayor Ron Kirk.

“We stand together, as a nonpartisan coalition, calling on all elected leaders in Texas to support reforms that make democracy more accessible and oppose any changes that would restrict eligible voters’ access to the ballot,” the companies and other groups wrote.

The House version of SB 7 lacks some of the more controversial provisions in the version passed by the Senate. It set the boundaries on early voting hours, from 6 a.m. to 9 p.m., after some counties offered extended hours and Harris County, home to Houston, had a few 24-hour voting days. It also banned drive-through voting, which Harris County added due to the pandemic. The Senate version also allowed partisan poll watchers to record voters, including those who are receiving assistance while voting if the watcher “reasonably believes” the assistance is unlawful. It’s not immediately clear whether those provisions will be added back into the bill.

Other bills not directly related to the omnibus voting legislation include measures to require voters to provide a Texas driver’s license or state ID number when applying for and returning a mail ballot and prohibiting return of mail ballots to unattended receptacles other than mailboxes or common carrier receptacles.

Texas lawmakers are considering the changes as GOP legislatures around the country continue an effort to revise their voting laws. On Thursday morning, Florida Governor Ron DeSantis signed a sweeping election bill that makes changes to mail voting, drop boxes and other procedures. Georgia Governor Brian Kemp signed a bill in March that expanded early voting hours in some counties, added ID requirements for absentee ballot requests and put limits on drop boxes. Republicans in Ohio introduced a bill on Thursday that sets limits on drop boxes, moves up the deadline to request absentee ballots and offers one fewer day of early voting.