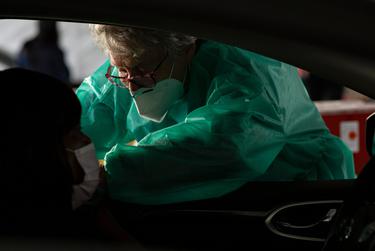 People waited for hours to receive their drive-thru COVID-19 vaccine at the Fair Park vaccination site in Dallas. Feb. 8, 2021. The state of Texas is launching a public awareness campaign to encourage people to trust the vaccine and take the shot. Credit: Shelby Tauber for The Texas Tribune

Then she feigns shooting a basketball through a hoop with her hands.

Another video released this week features vaccinated Texans over 65 talking about seeing their grandchildren again.

The ads, developed by the Texas Department of Health Services and released in the past week, are the first in a $2.3 million public awareness campaign being launched by the state to increase acceptance of the COVID-19 vaccine and inform the public on how to get the shot.

It comes amid fears that not enough people will choose to be vaccinated in order to stop the spread of the deadly virus, which has killed 39,000 Texans and which experts estimate can only be overcome if at least 75% of the population is immunized. National surveys indicate that as many as 40% of Americans are hesitant to get the shot, with those numbers disproportionately higher among communities of color.

Health experts and public officials widely agree that the vaccine is safe. Pfizer and Moderna reported their vaccines are 95% and 94% effective, respectively, at protecting people from serious illness, and while no vaccine is without side effects, clinical trials for both Pfizer and Moderna show serious reactions are rare.

Most of the state’s efforts, including TV, radio and print buys, are in development amid ongoing market research, but won’t be rolled out publicly until more vaccine supplies are available, state health officials said.

“At this point, the demand for vaccine is much greater than the supply,” said DSHS spokesperson Chris Van Deusen. “We’ll increase the resources we’re committing to promoting vaccination as the supply increases and as more people become eligible to be vaccinated.”

Early efforts in communities of color, which have been disproportionately affected by the virus but have less access to the vaccine than their white counterparts, are being led by some local governments and advocacy groups.

Harris County Judge Lina Hidalgo said “the bulk of our investments” in a new countywide awareness program are focused on the vaccine hesitancy issue due to high rates of skepticism in the state’s most populous county.

“Even as we wait for vaccine supplies to catch up, we can’t wait on our work to get folks ready to go so they’re registered for the waitlists and ready to get the vaccine as the supply chain catches up.”

The demand in Texas right now far outpaces supply, with upwards of 8 million Texans eligible for the injection but fewer than 3 million receiving at least one dose as of Feb. 10.

“Timing is a really big challenge”

Texas health advocates say that while state officials are waiting for vaccine supply to increase, it’s a good idea to get widespread awareness programs ready to launch.

“Leaders in their awareness efforts need to be honest and acknowledge the fact that people are and will experience frustration as they try and access a vaccine,” said Rekha Lakshmanan, director of policy at The Immunization Partnership in Houston. “This is the reality. Hopefully, these challenges will be mitigated when more vaccines come online, but leaders need to use this time right now before mass vaccination begins to develop … awareness programs.”

But starting more targeted awareness campaigns early is an important step toward achieving a higher level of acceptance and avoiding delays in getting the shot administered to a large number of people when it is finally available, said Kolina Koltai, who studies vaccine misinformation at the Center for an Informed Public at the University of Washington.

“The more vulnerable populations where there’s higher rates of vaccine hesitancy, it definitely makes sense to target resources there,” Koltai said. “I would argue for sooner, rather than later. You want people to want to get it [the vaccine], even if it’s not available yet.”

Molly Sauer, a research associate at Johns Hopkins Bloomberg School of Public Health, said a lack of continuity and consistent messaging from various levels of government can confuse residents who don’t know where to go for primary sources.

Meeting vaccine demand and spreading accurate information need to occur simultaneously, even if some states have delayed public messaging until now, she said.

“You’ve seen a lot of different approaches in different states,” Sauer said. “Some have tried to be really at the front, even if it meant they were getting ahead of some of the federal messaging. Others are playing catch up. Timing is a really big challenge.”

And the Ad Council, whose national health campaigns helped increase widespread acceptance of the polio vaccine in the 1950s, has launched the COVID-19 Vaccine Education Initiative in partnership with the COVID Collaborative to combat vaccine hesitancy and created a toolkit for states and local community groups and governments to use for their own awareness campaigns.

The effort is focused on communities of color but will target a broader swath of the public as vaccine supplies grow.

A late December survey led by the Ad Council showed that public health officials were among the most trusted sources for vaccine information — while politicians were among the least trusted.

Across the country, campaigns in large states like California and New York have concentrated on vulnerable populations and focused their efforts largely on informing people about the vaccine, rather than targeting hesitancy specifically.

California’s Vaccinate All 58 program aims to reach all of California’s 58 counties with a focus on communities with limited access because of race, ethnicity or language barriers.

And cities from Nashville to New York City are ramping up their own messaging to encourage people to get the vaccine. In Florida, where the state-run awareness efforts largely focus on vaccine sites and availability, city officials in Miami have released public service announcements about the safety and necessity of the vaccine on YouTube and other social media, using public health figures and local officials to urge eligible residents to get their shots.

The state’s COVID-19 Vaccination Plan, released in October, says the state will focus mainly on educating the public about the importance and safety of the vaccine, how to obtain the shot and what to expect. The DSHS website has an FAQ and information about who is eligible and where vaccinations are available.

The state has already done some digital advertising to push the idea of vaccine safety and plans to use TV, radio, online and social media advertising, as well as outdoor advertising. A statewide media blitz planned for the months ahead will also target people in rural areas, another population that has shown higher hesitancy to the vaccine.

In addition to state efforts, a campaign initiated by the Texas AARP features a series of online question-and-answer sessions, called “Tele-Town Halls” to reduce hesitancy among older and more vulnerable residents, whose acceptance of the vaccine is especially critical to reduce deaths and hospitalization rates.

In Harris County, where more than two-thirds of residents are Black or Hispanic, Hidalgo said last week that hesitancy among those populations presents “a clear and present danger” to efforts to overcome the pandemic.

Commissioners there allocated $1 million — with flexibility to spend more — for its “Stay Smart, Do Your Part” campaign aimed at reticent communities.

The county is targeting ZIP codes where vaccine rates are low among people of color with ads in English and Spanish — along with an online toolkit for community groups in English, Spanish and Vietnamese.

There are also plans for outdoor advertising and partnerships with grassroots groups and other organizations to further spread the message to these populations, said Rafael Lemaitre, Hidalgo’s spokesperson.

“It’s easy to get wrapped up in the short term media coverage about this sky high amount of demand with the relatively low amount of [vaccine] supply,” he said. “But we have to look around the corner and that’s what we’re doing with this campaign, because we know that the problem [of supply] can very easily and likely will be reversed.”

AARP has been a financial supporter of The Texas Tribune, a nonprofit, nonpartisan news organization that is funded in part by donations from members, foundations and corporate sponsors. Financial supporters play no role in the Tribune’s journalism. Find a complete list of them here.