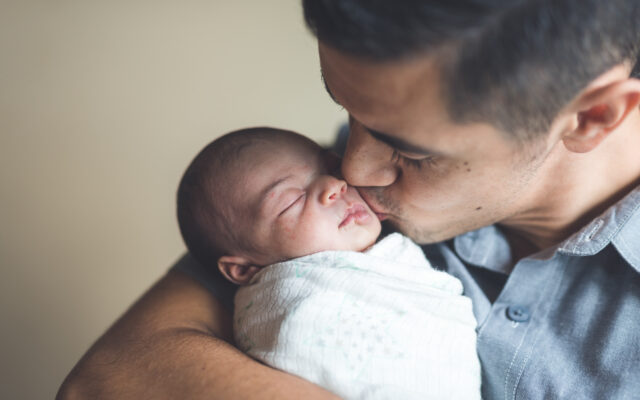 Courtesy of Getty Images
With Father’s Day this Sunday, there’s a renewed push in Washington D.C. to give new parents the best present of all—more time with their babies.
Paid time off for new dads is available at just 9% of companies in the U.S., and even when dads can take time off, many don’t feel they should, and most take two weeks or less.

Parents like Colin Allred know babies are full-time jobs. In 2019 the former NFL linebacker turned U.S. congressman took two weeks off from Washington to be home with his newborn son Jordan in Dallas. It was the first paternity leave ever announced by a member of Congress.

“It was really important to me. I mean, I grew up without a father. But my whole life, I thought, ‘When I have a chance to be a father, I’m going to be a good dad. I’m going to be there,”’ Allred told “CBS This Morning” co-host Tony Dokoupil. “And, you know, I think in our household, my wife and I try to keep things as equal as possible. And this was part of that.”

Earlier this year, when Allred’s wife Allie gave birth to their second child, Cameron, he took another leave —this time for a month.

“Two weeks wasn’t long enough with the first one. For my wife, for me, for our son Jordan. I really felt like I needed longer,” Allred said.

Most dads get less time than that despite research showing that paternity leave is tied to “improved health and development” in children and, by fostering equality, can “increase employment and pay for mothers.”

“Yeah. I mean, there’s an expectation in the workplace that, you know, you didn’t have the baby. So what do you need the time off for, right? And there’s also, of course, kind of the cultural expectation in many cases that mom is going to, you know, do all of the childcare,” Allred said. “And, of course, what we’ve seen…Women are being asked to do all the childcare, all the housework, and still be in the workforce. And, you know, that’s just not working.”

The United States is one of just two countries along with Papua New Guinea that does not guarantee paid parental leave to men or women. It’s an issue that has gotten support from Former President Obama, Former President Trump, and President Biden.

All three presidents have mentioned the issue in major speeches, including the State of the Union. And yet, it doesn’t get done.

“You know, that’s one of the things I think makes you feel so frustrated with Washington, in general, is that you can have a lot of agreement around something, but still it’s very difficult to get anything done and to get it through and to become law,” Allred said.

President Biden has proposed giving workers 12 weeks of paid leave under his “American Families Plan.” But that would cost about $225 billion, and while Democrats want to raise taxes on the wealthy in order to pay for it, Republicans do not.

“Whether or not it could be bipartisan, I don’t know, you know? I know that…we’re gonna get it done either way,” Allred said.