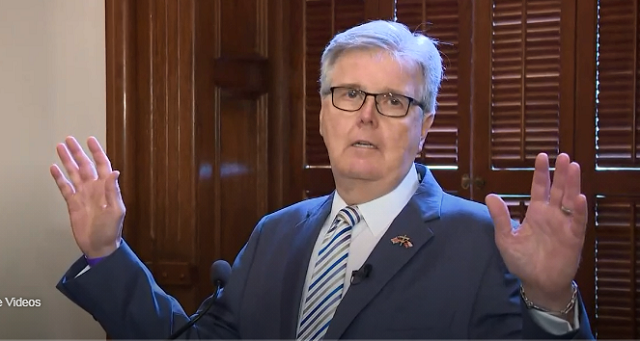 “I’m tired of lies and the nest of liars who continue to repeat them,” said Patrick.  “The bill is needed because Americans no longer trust the system, and a country where voters do not trust the system is a country in peril.”

The measure would ban drive-thru voting, limit early-voting hours and make it illegal to send mail-in ballot applications to individuals unless they’re requested.  In an attempt to make it easier to vote during the pandemic last year, Harris County implemented drive-thru voting and 24-hour early voting to accommodate shift workers.

“I have news for Harris County.  You’re not the capital of Texas,” Patrick said.

At a news conference at the State Capitol Tuesday, Patrick accused critics of race-baiting.

“When you suggest that we’re trying to suppress the vote, you are in essence, between the lines,  calling us racists and that will not stand!” he shouted.

Patrick also lashed out at Delta Technologies and American Airlines, which have voiced their opposition to Senate Bill 7, the Election and Ballot Security Bill.     Patrick said he was “stunned” that the company  issued a statement opposing the bill after a representative called his office and said neither he or the CEO had read the legislation.   Both Delta and American Airlines have their headquarters in Texas.

“They come here because we’re the best state to do business in, but if they think they’re going to attack the legislature on issues they have no knowledge about and come to us with their hand out, well that’s just not going to be the way we do business,” Patrick said.