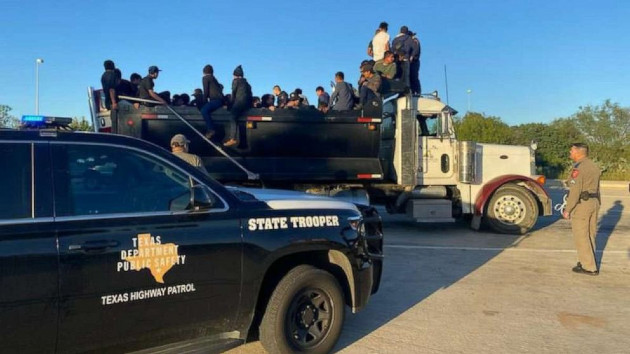 (NEW YORK) — A Texas man was arrested Tuesday for allegedly trying to smuggle dozens of undocumented immigrants across the U.S. border hidden in a dump truck, according to the Texas Department of Public Safety.

Robert Flores Jr., 38, from Poteet, Texas, was charged with 84 counts of human smuggling after being stopped on Interstate Highway 35 in Cotulla, Texas, for a commercial motor vehicle safety inspection, authorities said.

The suspect allegedly bypassed a border patrol checkpoint in Texas’ Webb County when he was pulled over, Texas DPS spokesperson Lt. Chris Olivarez said on Twitter.

The migrants were handed over to U.S. Border Patrol, according to Texas DPS.

U.S. Border Patrol’s apprehensions of migrants have exceeded two million so far this fiscal year, including people who turn themselves into authorities between land ports of entry, according to agency data from September.

Last year, law enforcement officials detained 1.66 million migrants and encountered them nearly two million times. As of September, there have been more than 2.4 million encounters.