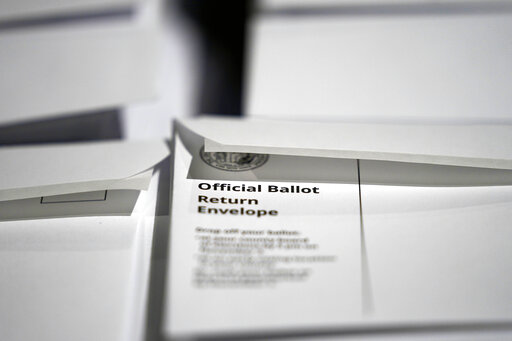 FILE - In this Thursday, Sept. 3, 2020, file photo, stacks of ballot envelopes waiting to be mailed are seen at the Wake County Board of Elections in Raleigh, N.C. Data obtained by The Associated Press shows Postal Service districts across the nation are missing the agency’s own standards for on-time delivery as millions of Americans prepare to vote by mail. (AP Photo/Gerry Broome, File)

SAN ANTONIO (KTSA News) – A candidate in the mayor’s race in Carrollton, Texas has been arrested and charged with 84 counts of mail ballot application fraud.

Investigators say Zul Mirza Mohamed obtained a virtual mailbox using a false identity.  He’s accused of forging at least 84 voter registration applications for Denton residents and then sending them to a fraudulent location. At the time of his arrest, Mohamed allegedly was stuffing envelopes with additional mail ballot applications for neighboring Dallas County.

The Texas Attorney General’s  Election Fraud Unit helped the Denton County Sheriff’s Office with the investigation.  In addition to 84 counts of mail ballot application fraud, the mayoral candidate faces 25 counts of unlawful possession of an official mail ballot. If convicted, Mohamed faces up to 20 years in prison for these offenses.

“I strongly commend the Denton County Sheriff’s Office, the Lewisville Police Department, and Texas Department of Public Safety as well as the Denton Elections and District Attorney’s offices for their outstanding work on this case and their commitment to ensuring a free and fair Presidential election in the face of unprecedented voter fraud,” said Texas Attorney General Paxton. “Mail ballots are inherently insecure and vulnerable to fraud, and I am committed to safeguarding the integrity of our elections. My office is prepared to assist any Texas county in combating this form of fraud.”