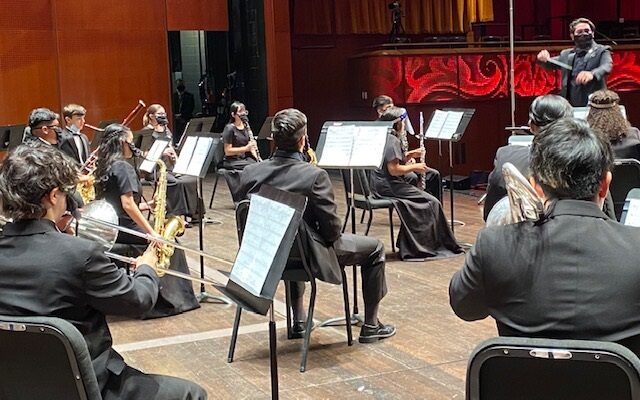 SAN ANTONIO (KTSA News) – A San Antonio high school band is one of three across the state selected to play at the Texas Music Educators Association Convention next month.

Burbank High School in the San Antonio Independent School District was the only band program chosen from the South Texas Region.  The other two are from Dripping Springs in the Central Texas area and Flower Mound in North Texas.

“This selection is the opportunity of a lifetime that very few band programs in the state get to experience,” said Hector Trevino, director of bands at Burbank High School.

Because the convention will be virtual this year, the Burbank Band recently recorded a 30-minute concert featuring its  wind ensemble, brass ensemble and concert band at the Tobin Center for the Performing Arts.  The young musicians wore their formal concert attire–the boys in tuxedos and bow ties and the girls in their formal gowns.  They also wore masks.

The flutists wore clear face shields.  Some of the other musicians  wore  special masks with double-layered material over a slit for trumpet and other brass instrument mouthpieces, while saxophone players used face coverings that draped over the mouthpiece.  Some just dropped their masks to their chins to play their instruments.

Jerika Prado, who plays flute, would have preferred to play live in front of an audience, but she was ecstatic that the video of her high school band will be shown to music educators across the state.

“Once we found out the news, we were just  super excited to perform,” said Prado.

Drum Major Jason Munoz is a senior who plays alto saxophone.  While this has been a challenging year because of COVID-19 restrictions and protocols, he’s glad he has his music and fellow band members to rely on.

“You make a lot of friendships that are going to last forever, not just here at school, but I’ve met band members all over the city,” said Munoz.

He told KTSA News that music will always be a part of his life.

“Music is something I can’t live without.  It motivates you.”