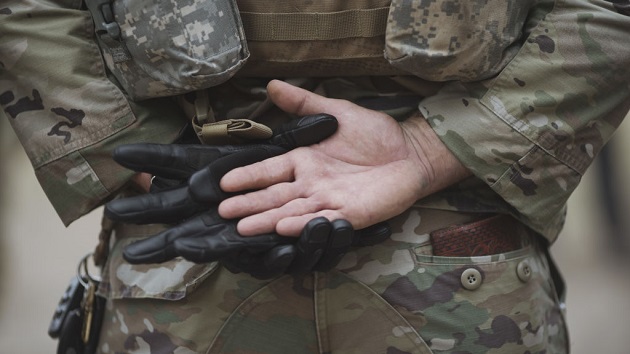 A National Guard member as Greg Abbott, governor of Texas, not pictured, tours the border between the US and Mexico along the Rio Grande River in Eagle Pass, Texas, US, on Monday, May 23, 2022. A Louisiana federal judge blocked the Biden administration on Friday from ending Title 42a pandemic-related border restriction that allows for the immediate expulsion of asylum-seekers and other migrants. Photographer: Eric Thayer/Bloomberg via Getty Images

(AUSTIN, Texas) — When she opened the door that one day in April, Sgt. Bishop Evans’ aunt, Felisha Pullen, said she knew instantly that her family’s worst fears had been realized. The 22-year-old Bishop they knew and loved was dead.

“The military doesn’t show up without the soldier, if they know where the soldier is,” Pullen said.

Evans, a sergeant with the Texas National Guard, died while assigned to Operation Lone Star, a border security joint initiative launched by Texas Gov. Greg Abbott in March 2021 to curb the influx of migrants entering the U.S. Abbott has dispatched thousands of state troopers and service members to dozens of counties near the border, with authorization to arrest migrants on trespassing charges if they are caught on private property in Val Verde and Kinney counties.

Evans, upon seeing two migrants drowning in the Rio Grande River one day, jumped into the water to attempt to rescue them, going beyond his duties. But he was swept away by the river’s current.

“These things can happen even if he’s not in the military, but my heart hurts that he’s not with us,” Jo Ann Johnson, Evans’ grandmother, said. “That he had so much potential.”

Members of Evans’ family said they have yet to receive a report on the details of what exactly transpired.

An already controversial program, Operation Lone Star is now under increasing internal scrutiny for what critics are calling its unclear delineation of responsibilities, as well as insufficient training and resources for service members.

The Texas National Guard wrote in a statement to ABC News that water operations training was not provided because water rescues did not fall under the “purview” of the soldiers at security points.

“Because of the selflessness of Texas Guardsmen, the necessity for throw-ropes became apparent and were ordered,” they wrote. “Unfortunately, that equipment had not been delivered in time for Sgt. Evans to use it in his attempt to rescue the drowning migrants.”

Jason Featherston, a former senior enlisted leader in the Texas Guard who retired just as the operation was underway, said he is now speaking out about the program on behalf of the soldiers who would risk severe consequences if they did so themselves.

“It was a rush to put a number of soldiers on the border,” he said. “The magnitude of problems with pay and equipment with Operation Lone Star is more than I’ve ever seen.”

“I couldn’t plan to do a mission this bad ever,” he said.

The program also has taken a toll on service members’ mental and emotional health, according to Featherston. He said in January alone, 14 soldiers expressed thoughts of self-harm, though this went unreported.

Not long after Evans’ death, the Texas Legislature held a three-hour hearing with the program’s leaders, who requested additional funding and more mental health resources like behavioral health specialists.

To date, Texas has allocated nearly $4 billion in taxpayer funds to the operation, including an additional $500 million in funds approved by Abbott in late April.

A soldier recently deployed under Operation Lone Star, who spoke to ABC News on the condition that ABC News not name him or show his face, said the program is a “very political mission.”

“We’re here so the government can say, I put X amount of soldiers on the border to keep Texas safe so that he [Abbott] can get votes,” he said.

The governor’s office has not responded to ABC News’ requests for comment about the initiative. But Abbott claims it has successfully taken illegal drugs and criminals off the street.

Still grieving the loss of Evans, Pullen said her family now has a “new mission” to push for change.

“If it could happen to Bishop, then certainly it could happen to anyone,” she said. “Our military or any servicemen, and women that are down there for the purpose of this mission, let’s make sure they have what they need. Make sure it’s as safe as possible.”