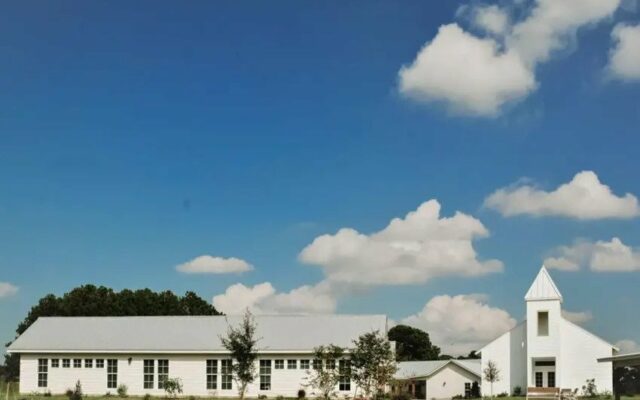 A chapel and buildings located at The Refuge, a foster care facility in Bastrop. Authorities say an employee is being investigated for allegedly obtaining photos of two girls under the shelter's care with the intent to sell them. Credit: Via Refuge Ranch website

Do you work with or for Texas Child Protective Services? We’d like to talk to you. The Texas Tribune is pursuing a number of stories involving the state’s child protective services agency and we’d like to speak with as many staffers as possible. You can contact reporter Reese Oxner at [email protected] or you can leak us a tip by contacting us over Signal at 512-745-2713.

A Texas Department of Public Safety investigation into a state-licensed facility for sex trafficking victims where an employee allegedly took nude photos of two girls found no evidence that the victims were also sexually abused or assaulted, according to agency director Steve McCraw.

Details of the accusations against nine employees at The Refuge, a Bastrop shelter for children who are victims of sexual assault, came out during a federal court hearing last week and initially described the incident as possible trafficking or abuse.

In a letter to Gov. Greg Abbott, McCraw confirmed that the Bastrop County sheriff’s office is investigating a Refuge staff member accused of obtaining photos of the girls with the intent to sell them. No arrests have been made, he said.

However, McCraw said some of the details that came out last week had not been properly verified, adding that investigators with the Texas Rangers found no evidence that the children had been victims of sex trafficking while at The Refuge. McCraw’s letter did not say whether the accused staff member purchased illegal drugs and alcohol and gave it to the girls, as was alleged during last week’s court hearing.

Paul Yetter, the attorney representing foster care children in a yearslong federal lawsuit against the state, pushed back against McCraw’s letter, which declined to define the accusations as possible trafficking.

“The letter in question confirms the existence of pornographic photographs of these children in state care, and that the children’s photos were sold for drugs and alcohol. Based on that alone, an initial finding of no evidence of sexual abuse or trafficking is both surprising and extremely troubling, especially since the investigation is still ongoing,” Yetter said.

McCraw also detailed another previously unknown investigation into separate allegations at The Refuge. Two residents fled the facility on Feb. 20 with the alleged help of two staff members, according to his letter. Facility officials reported the incident to the Texas Department of Family and Protective Services and the local sheriff’s office. Four employees were terminated as a result, McCraw said.

The Bastrop County sheriff’s office is conducting a criminal investigation on the four employees and one was arrested for making a false statement to the FBI, McCraw wrote.

McCraw’s letter did not address other claims that emerged last week, including that other relatives of the employee accused of taking the photos also worked at The Refuge or that other shelter staff members were allegedly also involved in selling the photos.

The governor’s office released a statement thanking the Texas Rangers but did not address the allegations against the employee accused of attempting to sell nude photos of two of the shelter’s residents.

“While it is a relief that no instances of child sex trafficking were found at The Refuge in the investigation conducted by the Texas Rangers, it is unfortunate that the letter DFPS submitted to the federal court monitors became the conclusion before the investigation by law enforcement was complete,” the governor’s office spokesperson Nan Tolson said. “Governor Abbott is committed to ensuring that any allegations of abuse or neglect are properly investigated by DFPS.”

“We are deeply relieved by the Texas Rangers’ finding,” Brooke Crowder, founder and CEO of The Refuge, said in a statement. “We are committed to continued close cooperation with DPS, the Texas Department of Family [and] Protective Services and the Bastrop County Sheriff’s Office as they pursue justice for the girls involved in the cited incidents.”

The Texas Senate Child Protective Services committee will meet noon Thursday to discuss details of the situation at The Refuge. On Monday, there will be an interim hearing of the Texas House Human Services committee centered around these findings as well.

Texas officials ordered the shelter to close temporarily last week after the children had already been removed. Abbott said last week the Texas Rangers will investigate, arrest and pursue charges against any suspects related to the accusations.

The accusations against the shelter come at a time when the foster care system has yet to remedy numerous issues regarding its care of children. Multiple bombshell reports from federal court monitors have detailed abuse, neglect and deaths over the last several years.

Earlier Wednesday, Beto O’Rourke, the Democratic nominee for Texas governor, blasted Republican incumbent Abbott over the Texas foster care system and its decadeslong issues with caring for its children.

O’Rourke said the governor ignored longstanding problems that allegedly allowed the situation at the Bastrop shelter.

“I wish this was an anomaly, but it’s not,” O’Rourke said. “This didn’t have to have happened. There are changes we could have made.”

O’Rourke, who will face off against Abbott in the November general election, laid out several strategies for how he’d tackle the problem if elected governor during a press conference Wednesday.

Texas is missing out on millions of dollars in federal funding by being out of compliance with federal programs, O’Rourke said. He said he would ensure Texas falls in line with the Family First Prevention Services Act, a federal law that restructured federal child welfare funding. New guidelines aim to reduce entry into foster care, limit the use of group homes and other congregate care and fund substance abuse and mental health services.

If Texas were to come into compliance with the act, which passed in 2018, it would unlock millions of dollars for the foster care system, O’Rourke said. The Texas Department of Family and Protective Services is expecting a loss of $43 million in 2022 and 2023 because the state is not in compliance.

But getting into compliance is easier said than done.

DFPS officials have said it has not implemented all provisions of the federal program because Texas does not have enough qualified residential treatment programs to “serve the highest needs kids and draw down federal money.”

The state also does not have enough providers who offer the kinds of services required under the act, the department said, and the state says it’s unclear what services would qualify for funding. A statement on the DFPS website claims the department is awaiting federal guidance for how to proceed, along with feedback from Texas lawmakers.

Advocates and the federal judge overseeing a decade-old lawsuit over Texas’ foster care have called for the state to increase those services and use the funds drawn down to fund them.

Family preservation is paramount, O’Rourke added, and Texas should be investing to keep children with their immediate families or other family members before moving them to the foster care system. He said the state needs to invest in mental health resources for both children and their families to prevent unnecessarily removing them from loved ones and into a system found to be harmful.

O’Rourke also called for increased funding to Child Protective Services workers, to increase the number of case managers and its retention rate. The agency has been understaffed and experiencing high turnover rates for years, with many citing long hours for little pay.

“Typical Beto O’Rourke—all rhetoric, no real solutions,” Abbott’s campaign spokesperson Renae Eze said in a statement after the press conference. “It’s sad that Beto O’Rourke is resorting to politicizing the well-being of Texas children to benefit his campaign and distract from his disastrous interview during SXSW this weekend, where he discussed his true passions of taking away Texans’ guns, opening our borders, and supporting President Biden.”

During the press conference, O’Rourke cast doubt on Texas’ approach to its foster care system in relying on private contractors to care for children in its care.

“Why are we privatizing the care for the most vulnerable in this state? You’re bound to have problems,” O’Rourke said. “We outsource the state of Texas’ responsibility, but I can’t think of a more important job.”